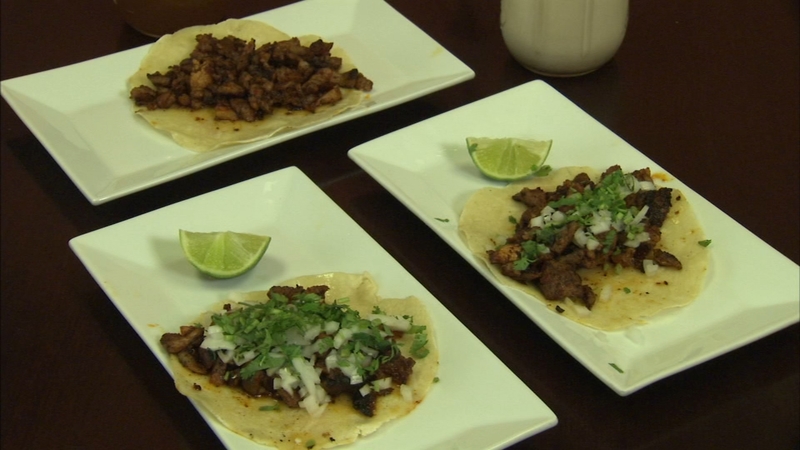 CHICAGO (WLS) -- There are literally dozens of places to get tacos around Chicago, but La Chilangueada on the city's West Side makes tacos al pastor daily, in addition to tortillas.

The trompos are impressive, considering they're assembled by hand almost everyday. Vertical stacks of pork, fat and onions, crowned with fresh pineapple, they spin manually inside the kitchen at La Chilangueada.

There are guajillo and arbol chiles, as well as fresh garlic. Cooked on the vertical spit until crisp, they are finished briefly on the flat top, before being placed into handmade tortillas - another source of pride.

"We have the corn dough fresh so we make huaraches, gorditas, sopes and quesadillas we do them fresh as well," he said.

Rolled into balls, sandwiched between the mallets of a tortilla press then carefully placed onto the griddle, they make the perfect housing for crispy, chile-tinged pork, dressed with the standard accompaniment: white onions and fresh cilantro.

At the table, you don't need much more than some fresh limes and a bit of salsa (homemade of course).

"There's one green for people who don't eat a lot of hot stuff, it's like a tasty tomato. And then we have hot, just pure jalapeno. That one has six type of peppers," said Alanis.

So right now they're only making the trompo every other day, but in the next couple of weeks, they've got a project they're working on behind the restaurant where every day they'll have a big comal, or flat griddle where they'll be making tortillas and they're gonna have the trompo - the tacos al pastor - plus cabeza, that's head, plus tripa, that's tripe, sliced-to-order, just like they do in Mexico City.

EXTRA COURSE: La Chilangueada's huaraches, which are made with the same masa dough, but also stuffed with beans
EMBED More News Videos