Hurricane Dorian: Evacuees arrive in Chicago ahead of Category 4 storm 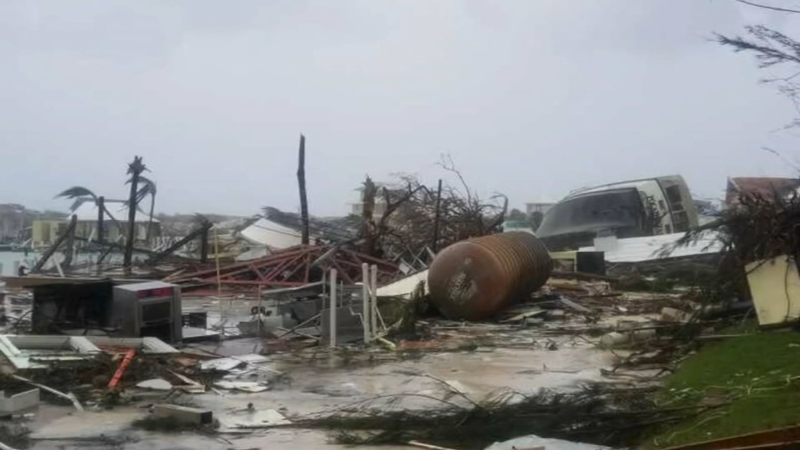 Hurricane Dorian: Evacuees arrive in Chicago ahead of Category 4 storm

CHICAGO (WLS) -- As Hurricane Dorian gets closer to Florida, people are scrambling to get out, with some landing in Chicago.

Several O'Hare flights outbound to the Florida coast have been canceled Monday.

Hurricane and storm surge watches on the coast were extended Sunday night to reach all the way north to the Florida-Georgia border and North Caroline has declared a state of emergency.

There are residents from Illinois and Indiana who were able to get out of Dorian's path and there are others who are riding out the storm.

Shawyne Jones and Phillip Rucker of Gary, Indiana was expected to be on a Caribbean cruise Monday, but it cruise was cancelled.

"The eye of the storm hit the Bahamas and then Carnival wants to send you there, that's horrible," Jones said.

The couple was on one of the last flights that left Miami Monday.

"They basically cut our trip short. We decided to just come home, that's why we're back," Rucker said.

Kaila Mugford, her daughter and her mother, Chonya Davis, were also supposed to be on a cruise that was canceled. They said they are happy to home safely.

'It was really sad to see everything going on in the Bahamas and seeing how slowly it was moving," Mugford said.

"The weather started to turn a little bit this morning and we were like 'oh please Lord let us get on this flight so we can get home,'" Davis said.

As Hurricane Dorian gets closer to Florida, people are scrambling to get out, with some landing in Chicago.

One Springfield couple is riding out the storm in a shelter in Freeport in the Bahamas.

"The winds are one thing but the water keeps coming. Thank God we're on the high spot on the Grand Bahamas in this concrete shelter," said Robert Murphy, who is sheltering from the storm.

A group of Bahamians gathered in Chicago, anxiously trying to get updates about conditions in the Bahamas.

Andy Follett and his son Drew arrived in Chicago early for the Chicago Bears football game on Thursday and were fortunate to get a flight out of Orlando.

"Being from the Midwest, you hear about tornados. When you actually go through a tropical storm, hurricane it's pretty intense," Follett said.

Those who live in a county with evacuation orders are being asked to heed the call. Beginning at noon, counties along the Atlantic coast are under mandatory evacuations. Dozens arrived to O'Hare Monday morning on an early flight from Jacksonville Florida, getting out of Dorian's path.

"A couple of times I've stayed through them, but Cat 5? No, I'm too old for that," said Florida resident Dorothy Aponnas.

"Stay at your own risk basically you know. It's a low area so storm surges can really affect your home or where you're staying," said Michael Wooley who arrived at O'Hare from Florida.

There are very few flights left in and out of Florida Monday. Orlando officials have already closed the city's airport.