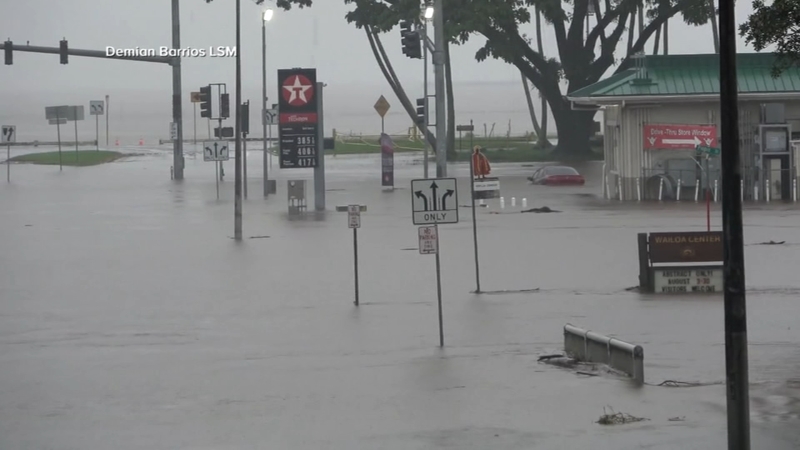 OAHU (WLS) -- Hurricane Lane has already dumped more than two feet of rain in some parts of Hawaii. The rain isn't over yet, even as Lane was downgraded to a tropical storm by the National Weather Service Friday night.

For Chicagoan Kristin Nicole, it's been a nightmare.

Nicole went to Hawaii for her babymoon, a fun final getaway before her child is born.

Now, she and her boyfriend are fighting for supplies, hunkered down in their hotel room hoping this storm passes soon.

"We've had a lot of phone calls with Delta. I was ready to come home," Nicole said.

She has been watching the reports of the hurricane drawing nearer, seeing her Island, Oahu, in the strike zone.

Back in Chicago, her mother is checking in multiple times per hour.

"She texts me like every 30 minutes. Are you ok? Where are you?" she said with a laugh.

Hurricane Lane has already dumped more than two feet of rain in some parts of Hawaii, and it's not done yet. Some Chicagoans who went there on vacation now find themselves stranded

And with good reason. FEMA officials are asking islanders to heed warnings that it's dangerous to be outside in some places.

"I'm keeping calm. We are prepared as we can be," Nicole said. "We're on the 32nd floor so if it does flood, hopefully it won't get this high."

But at local stores, she described a chaotic scene. Islanders are hunting for limited supplies while they still can.
"Costco was sold out, Target, they had their last pallet of water available. You see, like, the shelves and their canned goods are gone," Kristen said. "We had to like... not like fight, but be aggressive to get the cases of water."

Now, she has a fully stocked fridge, but she's wondering what happens if flights are grounded when they try to leave Monday.

"If we don't have water, how are we going to get to these stores, because they closed the ones near the hotel, and also are we going to be able to get home?" she wondered aloud.

"I didn't bring enough prenatal vitamins if we get stuck," she added.

When Nicole spoke with ABC7 Eyewitness News Friday the heavy flooding had not reached Oahu, but she said she is bracing for it. They are just hoping their flight isn't grounded when they try to leave Monday.

Other Chicago-area natives living in Hawaii braced for impact as well.

"I think it's more the uncertainty of not knowing what to expect that's making us a little bit more nervous," said Martha Ramirez, who lives in Honolulu with her husband Arturo.

Martha and Arturo have a two-week supply of food and a stockpile of water.