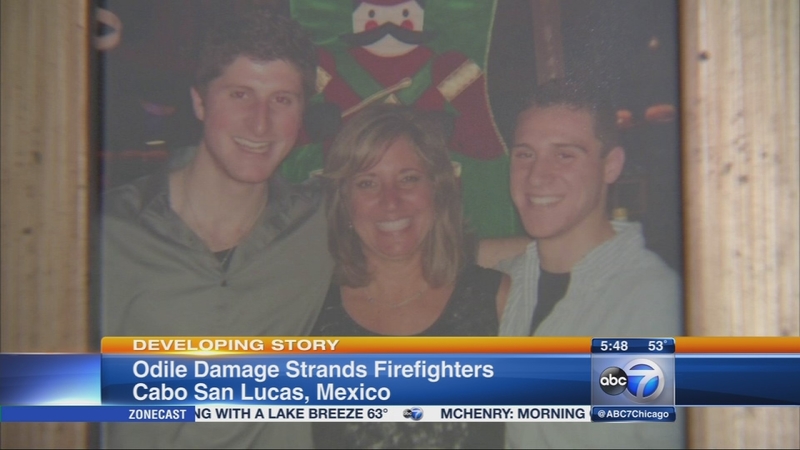 HOFFMAN ESTATES, Ill. (WLS) -- The 16 Hoffman Estates firefighters who were stranded in Los Cabos are now out of Mexico and in airports in Los Angeles and Phoenix. They are booked on flights to return home to Chicago on Friday.

Hurricane Odile left tens of thousands of people without water or power in Mexico.

The northwest suburban firefighters were desperate to get out of the city. They were in Cabo to attend the wedding of Fire Lieutenant Tom Mangiameli. But Hurricane Odile severely damaged the airport at the popular resort community.

The Hoffman Estates Fire Department is struggling with having so much of its force off the job. Those stranded in Mexico make up 20 percent of the department.

Senator Dick Durbin issued a statement saying he's been in contact with the State Department on the challenge facing those in Cabo San Lucas. Governor Quinn said he also working on getting the group home.

Authorities said they had flown 5,000 tourists out of the region by Wednesday afternoon. Thousands more were lined up at Los Cabos international airport Thursday. Officials estimated 30,000 travelers were stranded by the storm.

Many are getting on military planes and flying to Los Angeles, San Diego or other cities in Mexico to get out of Cabo. Government planes were also flying in water and other supplies.

Authorities told local radio that officers in Los Cabos would stop and question anyone they found on the streets after nightfall Wednesday to make sure they had legitimate business at that hour. Officials stopped short of calling it a curfew.

The measure sought to allay security concerns after days of looting of everything from convenience stores to big-box retailers. Some residents worried that private homes and condos could be next.

"People are running down streets with shopping carts, and you can see the desperation," Madelynn Pase, a 23-year-old Canadian living in Los Cabos, said by phone. "The supermarkets are all empty, so they're going to go to the next best thing."

Pase said people had been walking around at night shining flashlights into residences including hers, and she worried it could be would-be robbers casing potential targets. She spent the previous two nights sleeping on the floor to make it seem like her place was abandoned, and therefore without any food inside.

President Enrique Pena Nieto's office said the federal government was working closely with state authorities on relief efforts in the areas battered by Odile, including restoring water and electricity.

It said more than 239,000 people had their power knocked out by the storm, but predicted 95 percent of electrical service would be restored in the coming days.