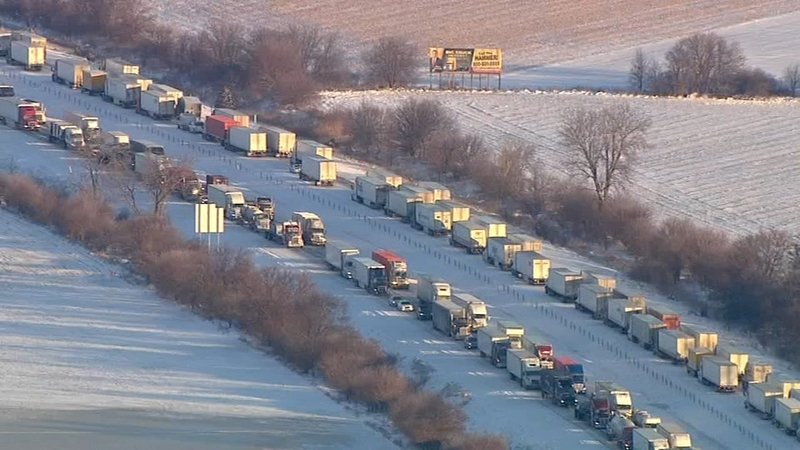 JASPER COUNTY, Ill. (WLS) -- Traffic is once again moving on Indiana's I-65 after many drivers were left stranded on a snowy interstate for hours overnight Thursday.

Plow trucks have been working around the clock to clear the expressway as tow truck drivers were pulled from outside of the county to help the drivers stranded on I-65.

However, despite their efforts, one crash has turned fatal, ISP officials said.

Just minutes after lanes were reopened on I-65, police were called to the scene of a fatal crash near mile marker 193 in Remington.

Just minutes after lanes were reopened on I-65, police were called to the scene of a fatal crash near mile marker 193 in Remington.

It comes after a winter blast packed a mighty punch, leaving I-65 in Northwest Indiana recovering from the overnight blow.

"There are cars that are in the ravine. I don't even think people have noticed they are even in there yet," said Kelly Borrmann.

Flashlights, a windshield scraper and a blanket are some of the items you need in your car for winter driving.

Jack-knifed semis and other vehicles littered the interstate for 20 miles from Lowell to Remington, according to officials.

Many drivers were stuck on the highway for nearly 17 hours.

"The wind, creating whiteout conditions, so it was very difficult to travel. It made I-65 impassable for hours," Sgt. Fifield said.

Northwest Indiana got the brunt of the winter storm, seeing the highest snowfall accumulation in our area.

State police continued to urge the dangers of the hazardous travel conditions Friday, with road salt offering little to no use, at first, due to the low temperatures.

But as the area warmed up, some stretches of the highway slowly became passable.

It was reopened shortly after 1 p.m. Friday with the help of more than 150 plow trucks that were rotating 12-hour shifts as they cleared a way for drivers.

This, as tow trucks had to be called from outside of Jasper County to help the many people left stranded.

"Yeah, you couldn't go anywhere. It was stopped," said one driver.

The McCollam family were among the many who got stranded, as they were driving back from Disney World in Florida. They had hoped to beat the storm, but were not so lucky.

They were eventually rescued and are now relieved to be back home.

"We didn't get out until I think around six this morning, the family said. "So yeah, it was it was an interesting night."

Indiana State Police said they received 131 calls for help during the backup.

"It's pretty bad. It's very slippery. You got to really like crawl and leave enough distance. It's very dangerous," Borrman said.

Indiana State Police said this should be a reminder for all drivers to pack a travel kit in case of any emergencies.

At least 10 crashes reported injuries, but those victims are expected to be okay.