Singer Helen Reddy, known for 'I Am Woman,' dies at 78 in Los Angeles 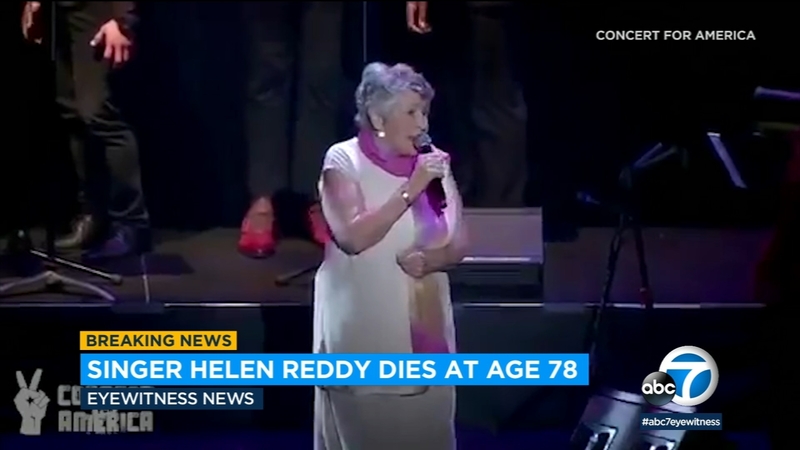 Singer Helen Reddy, known for 'I Am Woman,' dies at 78

LOS ANGELES -- Australian singer Helen Reddy, best known for the feminist anthem "I Am Woman," has died at age 78 in Los Angeles.

During a career that spanned nearly four decades, Reddy released 18 studio albums, with eight hits landing at No. 1 on Billboard's adult contemporary chart. She also acted in films and musicals and made multiple television appearances. She announced her retirement in 2002, but subsequently made a few comeback concert appearances.

Reddy was most closely associated with "I Am Woman" on her debut album in 1971. The song with its reference to "Hear me roar" celebrated female empowerment and made her an icon of the feminist movement.

The singer enjoyed a prolific career, appearing in "Airport 1975" as a singing nun and scoring several hits, including "Ain't No Way To Treat a Lady," "Delta Dawn," "Angie Baby" and "You and Me Against the World."

Reddy died just weeks after the release of a film about her life titled "I Am Woman."

"She was a wonderful Mother, Grandmother and a truly formidable woman," they said in a statement. "Our hearts are broken. But we take comfort in the knowledge that her voice will live on forever."

RELATED: 'I Am Woman' looks at the life of singer Helen Reddy

The new movie 'I Am Woman' gives us a good look into Helen Reddy's life, and how her a signature song made a huge impact on the women's movement.