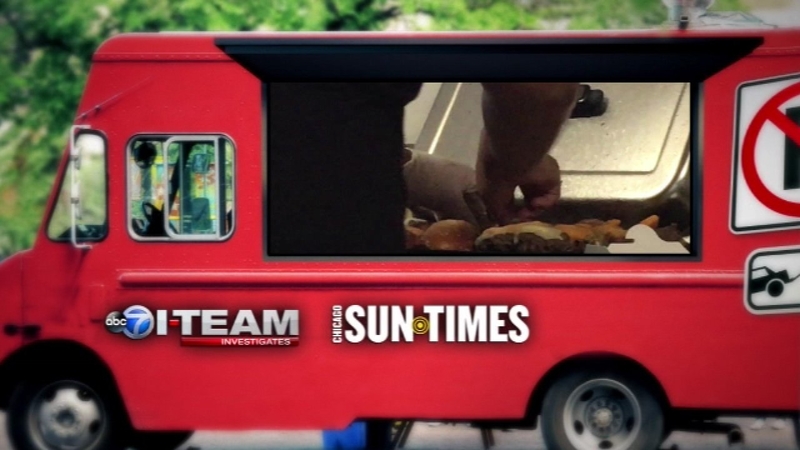 Cooks using their bare hands, touching hamburgers and tortillas, making sandwiches and wrapping burritos: that isn't what you want to see when you go to eat lunch! Many of these food truck health violations could be caught by a surprise health inspection.

"It's a huge problem because it breaks every sanitation rule in the world," said Prof. Chuck Hamburg, food safety expert at Roosevelt University.

The ABC7 I-Team and Dan Mihalopoulos of the Sun-Times found that Chicago food trucks are a very low priority when it comes to health inspections. According to our analysis of city data, food trucks are scrutinized when getting their license or when an inspector shows up reacting to a complaint, but only a mere 10 percent ever get surprise or otherwise known as "canvass" inspections.

"These are lower risk food establishments, food trucks are lower risk, so they are not as frequent as we would do for the higher risk categories," said Dr. Julie Morita, Chicago Public Health Commissioner.

"It's obviously not okay, but it is a reality. When you get a surprise visit on the food truck the chances of them being shut down are a lot greater. You're working with a live product, under a lot of pressure in a very short period of time. Who is the byproduct of this? It's sanitation issues there's no doubt about it," Hamburg said.

Jason Knowles: "You wouldn't object to more surprise inspections?"
Gabriel Wiesen: "I'm saying the onus is on the city to have the amount of inspectors and go by the guidelines."

Wiesen, of the Illinois Food Truck Association, said trucks are also inspected at special events across the region.

"In order for them to participate in any festival they have to go to an inspection before or during festivals, and sometimes those are surprise inspections," Wiesen said.

The ABC7 I-Team called cities that have festivals and half said they don't do inspections. Instead, they ask for a copy of the truck's most recent inspection report.

The I-Team also found that the city's health department may not be categorizing trucks in the proper risk level, which determines the amount of inspections which should occur. For example, a truck called Slide Ride cooks hamburgers but is a risk three, the lowest priority for inspection.

"Yeah, that's absurd. They are doing raw meat, they are doing cooking, the guy is using his hands. That's a risk one," Hamburg said.

In the three-plus years Slide Ride has been in business, they failed three of five license inspections and two of four complaint inspections. They've never had a surprise inspection.

Jason Knowles: "They do have raw food and are storing food and cooking food. How is that not a risk one?"
Dr. Julie Morita: "If they are doing those kinds of preparations they would be a risk one, so we would need to know about those establishments and we would need to inspect them and see whether or not they do fit into the risk one category."

After our interview, the city told the I-Team they are retraining inspectors and making sure all trucks are in the correct category, despite being "seriously understaffed" according to the Inspector General.

"It's our job to balance the resources that we have with the safety of the public," Morita said.

Chicago's Department of Public Health is short nearly 100 inspectors and blames a lack of funding. Regarding the bare hands-on-food violations at the beginning of this report, most of the truck owners told the I-Team they didn't believe it was a violation. As for Slide Ride, the owner told the I-Team she's pulled her trucks from the streets because Chicago's parking regulations are too restrictive.