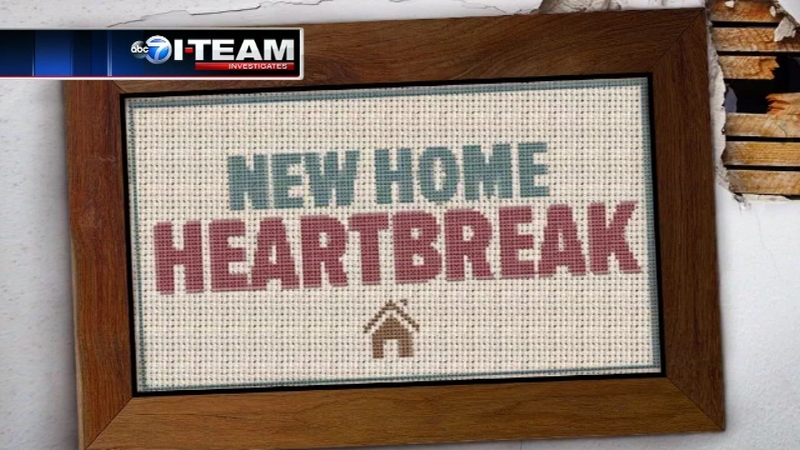 ROUND LAKE, Ill. (WLS) -- Some new homeowners are dealing with "new home heartbreak" because the contract they signed with their builder prevents them from taking action over what they call shoddy construction.

"The house looks like it's 50 years old. It's depressing and it is embarrassing," said Jennifer Wyton.

Jennifer and Mark Wyton said they thought the three bedroom home in Round Lake, Ill., would be a place to build a future with their children.

"It's truly been a nightmare that I don't want any other family to have to go through," Jennifer said.

The Wytons bought the home new, but say more than a year after moving in there are major construction problems.

"The first year, we had a window leak down the drywall," Jennifer said.

After the leak came ice inside on light switches and windows, black soot from the vents and water damage throughout the house. There are also large cracks in the floors.

The Wytons said the builder, Ryland Homes, fixed some issues but not all of them. They planned to sue until they discovered a clause in their contract saying they can't. Instead, their contract states they must go through an arbitration process using the American Arbitration Association or an independent third party "mutually agreed upon by you and us from a list provided by our warranty administrator."

"I said, 'Can I find my own arbitrator?' And they said, 'Well, it's an arbitrator that has no feelings towards-it's neutral.' I said, 'How is it neutral when it's an umbrella under you guys?'" Mark Wyton said.

The American Arbitration Association said its arbitrators "sign an oath agreeing to be bound by a Code of Ethics for arbitrators drafted in conjunction with the American Bar Association that requires impartiality and independence," and that "homeowners win almost 60 percent of the time."

But recently the Illinois Attorney General joined 18 other states in supporting the Consumer Financial Protection Bureau's proposal for limits on mandatory arbitration clauses.

"A lot of times you see in these contracts that the arbitration is going to be selected from a list provided by the developer, so already there is an implication that there may be a slant or a bias to the developer," said Cherie Thompson, real estate attorney.

Two owners of homes built by Ryland Homes in Huntley told the ABC7 I-Team that they are also dealing with construction problems and arbitration clauses that prevent them from suing.

Joe Simarano is angry about what he calls poorly laid tiles. He also said the floors were cracking, but Ryland responded.

"Our first floor had to be replaced, tile, underlayment and everything," Simarano said.

His neighbor showed the ABC7 I-team pictures of basement cracks, which he said cause flooding.

Ryland Homes was recently sold to the Cal Atlantic Group, and in a statement said, "We welcome any customer with a concern to please contact our customer care so that we can respond to them directly and address their concerns, as we have, and continue to do, each time these families have reached out to us."

"I see it as a tremendous benefit for consumer and builder, much less expensive than going through the court system and the panel that hears the dispute consists of three experienced builders," said Pete Stefani, president for the Northern Illinois Home Builders Association.

The Northern Illinois Home Builders Association acknowledges that builders are on its arbitration panels, although NIHBA's panels would not be used in a dispute over one of the Ryland homes.

"I believe that arbitration is a fair and unbiased process and it's a quicker, less costly process than going to the trial bar. I think when a homebuilder has to go to court to defend their product, I think that homebuilders' reputation is on the line," said Jerry Howard, CEO of the National Association of Home Builders.

But the Wytons said their credit is now on the line. The problems forced them to move out and turn their backs on their mortgage, they said.

"It was our house, it was where we lived. To just walk away from it..." Jennifer Wyton said.