Feds shut down cartel supertunnel that fed into Chicago 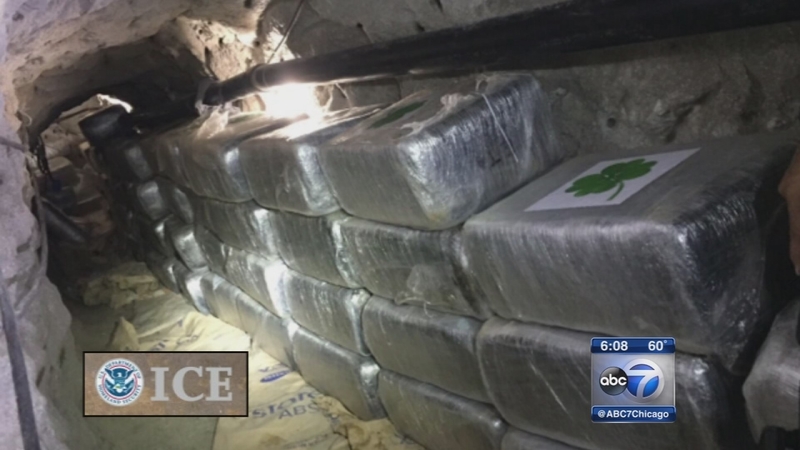 CHICAGO (WLS) -- Federal authorities have shut down one of the longest and most sophisticated drug underground operations between Mexico and the U.S., a cartel supertunnel that, down a hole and eight football fields long, came up in San Diego and fed a pipeline into Chicago and the Midwest.

Federal authorities seized 12 tons of marijuana worth nearly $6 million in the cross-border tunnel. Authorities say it is one of the longest and most sophisticated underground passageways they have ever seen. Equipped with a lighting and ventilation system, the drug smuggling subway links a warehouse in San Diego to one in Tijuana, Mexico.

"The cartels have a big footprint in Chicago because we are the Midwest's biggest distribution hub in America," says Dennis Wichern, DEA special agent in charge.

The top drug enforcement agent in Chicago keeps an eye on Mexico's drug cartels, primarily the Sinaloa cartel owned and operated by Joaquin "El Chapo" Guzman. It is no coincidence that El Chapo escaped a maximum security prison by tunnel last summer as his operatives are skilled tunnel engineers and builders.

The cross-border tunnel discovered by U.S. authorities on Wednesday is, they say, one of the longest and most elaborate underground passageways they have ever seen. Equipped with a lighting and ventilation system, the drug smuggling subway links a warehouse in in Tijuana, Mexico with one in San Diego.

Officials say the tunnel had ventilation and a lighting system, but the entrance was a bit unusual.

"This particular tunnel drops down about 32, 35 feet straight down, and then you're able to access the tunnel. This tunnel, unlike other tunnels, does not have that staircase, do not have that ladders, and we believe they were using a pulley system of some sort to bring the drugs up from the tunnel," says U.S. Attorney Laura Duff.

According to U.S. authorities the passageway stretched about 2,600 feet, which would make it one of the longest ever built under the U.S.-Mexico border.

Authorities say the 12 tons of marijuana seized Wednesday had an estimated street value of nearly $6 million, and 22 alleged cartel underlings were arrested.

Federal agents say they unearth a super tunnel about once a year. Drug investigators say that once over the border, cocaine and heroin are shipped by truck and sometimes by rail to Chicago.

In many cases the millions of dollars in drug money is then returned to Mexico by reversing those shipment routes.

In the last five years, federal authorities have shut down more than 80 cross-border smuggling tunnels, mostly in California and Arizona.