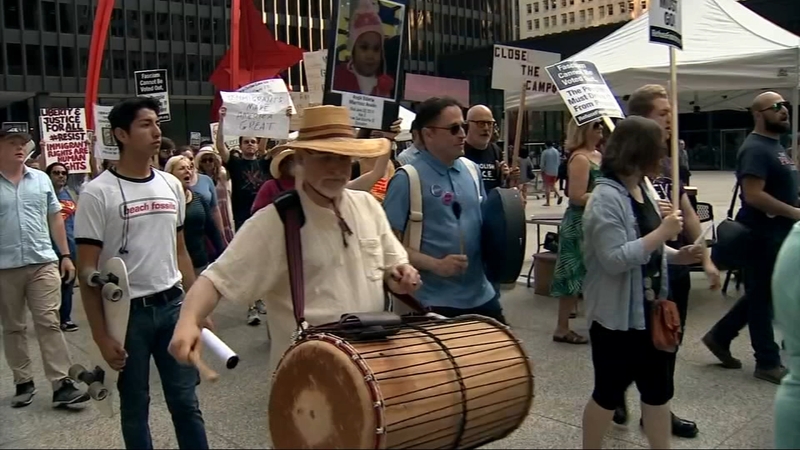 CHICAGO (WLS) -- The threat of immigration raids looms over Chicago, with an enforcement operation expected to start Sunday.

Officials across the city are speaking out, telling residents Chicago will not cooperate with ICE raids.

"You can witness, and what this means is you can get your phone out, put it on record, and you record every instance that's happening around you," said Pastor Beth Brown of Lincoln Park Presbyterian Church. "Many people's right are being violated."

Friday afternoon hundreds of people gathered in Federal Plaza, joining in the nationwide movement to voice their frustration over the impending ICE sweep while others reached out to local leaders asking for help.

The Lights for Liberty rally stretched from downtown Chicago into the suburbs and beyond through the rest of the country.

"How can we sit back and see these people treated this way? You really don't have to have a heart to understand that this is just wrong," said Brandy Bailey, protester.

They eventually marched from Federal Plaza to Chicago's ICE headquarters.

"If you see one of these vans in the neighborhood that clearly look like ICE agents, they may have police, they don't have ICE on their coats, then blow your bugle. Blow your horn, let people know that they're there," said Rev. Walter Coleman.

There have been reports of potential sweeps on Chicago's North Side already.

"ICE shows up at my client's door at 10 in the morning and says 'We're here to deport you,'" said attorney Chris Bergin.

Senator Dick Durbin met Friday morning with immigrant support agencies and families, noting there is a lot of anxiety about the expected raids.

"They are living in fear of what is about to happen," Durbin said. "When the president announced mass arrests and the mass deportations he has sent this fear across America that is breaking the hearts of so many."

Video shot Friday morning by a homeowner's security camera in Chicago Lawn shows armed officers in blue uniforms that identified them as "police" asking for a woman with a Latino name and alias. The homeowner said he did not know anyone by that name. The homeowner could not be released.

Mayor Lori Lightfoot announced the city will not cooperate with any ICE raids and Governor JB Pritzker said the state will also not coordinate in any way with federal immigration officials.

Hundreds of demonstrations are planned in protest of the treatment of migrants at detention centers. They're being called Lights For Liberty rallies and will take place in Chicago and several other cities around the country.

Organizers want major changes made to the conditions at the migrant facilities.

News of weekend ICE raids has rattled Latino communities in the Chicago area, and in Waukegan immigrant groups are trying to ease fears.

Waukegan has a large immigrant population, some of whom are living in fear of the federal raids.

Elvira Cantu, who is a manager at Las Vegas Hair Salon, said through a translator that the situation is sad and the salon is preparing for a drop in business. She believes some of their clients will be afraid to leave their homes.

Organizations and advocacy groups are standing by to help those who could be impacted by the raids.

The League of United Latin American Citizens (LULAC) National Immigration Committee along with the Lake County Immigrant Advocacy said they are opening a command center with on-site support in Waukegan to teach people about their rights and to provide emergency assistance to families if their loved ones are taken away.

"We will see a reign of terror inflicted upon our communities," said Julie Contreras of LULAC. "We will have children left alone in their homes when their parents, right here in the United States, are ripped out of their homes, only guilty of coming here for a better life."

Contreras asked the public to put pressure on lawmakers to protect immigrant families.

"We cannot stop making a call out to the senators and congressmen of this nation that should have already fixed these broken laws," she said.

"Unfortunately it is a very traumatizing experience. That's unfortunately how immigration acts, they don't see immigrants as humans and so they try to violate their rights. Sometimes it's difficult to remember we do have rights. We do have the right to remain silent. We are able to not sign anything and we are able to resist," said the Resurrection Project immigration organizer Laura Mendoza.