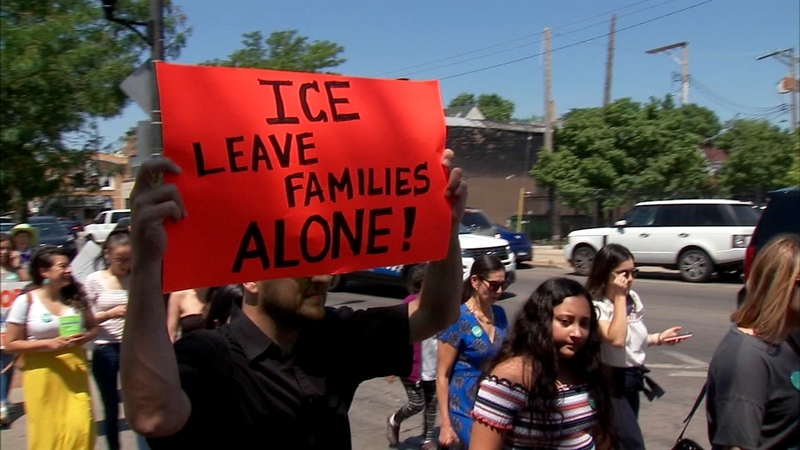 ICE raids expected to take place across US, including Chicago, on Sunday

CHICAGO (WLS) -- The nationwide threat of Immigration and Customs Enforcement raids expected Sunday are bringing fear and worry for many families across the country.

The raids would target more than 2,000 with final deportation orders, including families whose immigration cases were fast-tracked by judges in 10 major cities such as Chicago, Los Angeles, New York and Miami. Raids that were planned in Houston, Texas and New Orleans, Louisiana were postponed after Hurricane Barry hit Saturday.

RELATED: What to do if ICE agents show up at your door

Immigration advocates mobilized in response to the threatened raids, fanning out across the heavily immigrant neighborhood after a brief training session. But so far, there hasn't been any activity. In fact, only a handful of arrests appear to have taken place nationwide this weekend, with the only confirmed case in Chicago happening Friday morning when an Edgewater woman and her 2-year-old daughter were briefly taken into custody before being released with an order of supervision.

Mayor Lori Lightfoot was in Little Village on Sunday with Senator Dick Durbin and Congressman Chuy Garcia, trying to calm nerves frayed by rampant rumors spreading through the community.