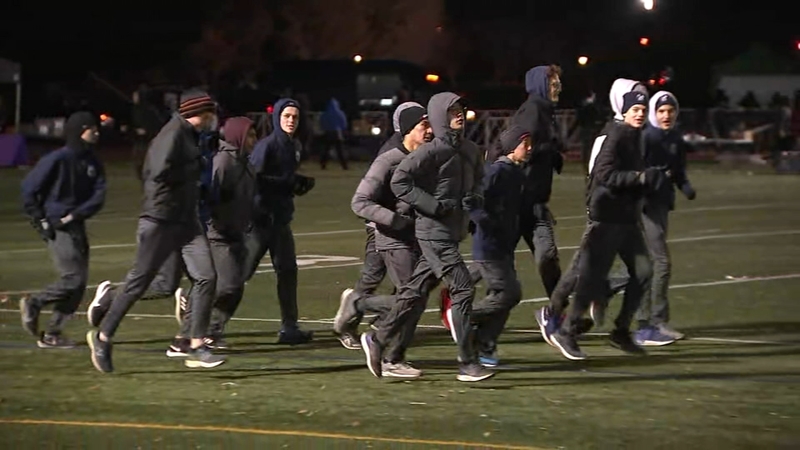 CHICAGO (WLS) -- Cross country runners affected by the Chicago teachers strike will be allowed to compete in Saturday's state competition after the Illinois Appellate Court deferred a ruling until next week.

"With everything going on in the last three weeks, I thought that was it; my season was over," said Sydney Partyka, senior at Taft High School

The runners have been trapped in several rounds of sprint and stutter legal proceedings after the ongoing teacher's strike sidelined runners in the regional competition last month. The delay means 20 runners get a shot at the state title.

"And the seniors get to end the season on their terms, on the field and not in a courtroom and not in a boardroom," said Kevin Sterling, attorney.

"It's been a rough time. I'm not going to lie about that," said Partyka.

"It was decided they would let us run the sectional cross country meet along with all the CPS athletes," said Ian Bacon, a cross country runner at Jones College Prep.

An 11th hour ruling from a Cook County Judge last Friday allowed CPS runners to compete in sectionals, despite having missed the regional round. Then the Illinois High School Association tried to intervene this week, asking a judge to block CPS runners from advancing.

But the court won't rule on that until Tuesday, so after they cross the finish line at Thursday's city-wide meet, Chicago cross country runners are off to Peoria.

"It's my last year, my last state race ever, so it's definitely going to be really special," Partyka said.

In a written statement, IHSA Executive Director Craig Anderson said of the ruling: "We remain respectful to the courts and will continue to follow the timeline they set forth. We are excited that the spotlight can now return where it belongs, on the student-athletes. Saturday will be an incredible day, as the IHSA celebrates 50 years of running the IHSA Cross Country State Finals at Detweiler Park in Peoria. We are so appreciative of our partnership with Peoria High School and the Peoria Park District for their efforts in making this event come to life. For many, the events of the past few weeks likely led them to report on or take interest in cross country for the first time. We hope they will consider making the trip to Peoria on Saturday to support all the competing student-athletes, as the IHSA Cross Country State Finals truly are a spectacle. The history, tradition, and pageantry don't just make it the biggest race in Illinois, but the finest in the country. We wish all the competitors great luck and fast times."
Report a correction or typo
Related topics:
sportschicagogage parkrunningchicago public schoolshigh school sportsstrikedistance running
Copyright © 2021 WLS-TV. All Rights Reserved.
TOP STORIES
25 shot, 6 fatally, in Chicago weekend violence: CPD
CTA bus driver beaten in Loop; teen charged: CPD
Fire breaks out at Hammond law office of murdered attorney
Missing endangered man, 64, last seen in Palos Heights: police
Chicago prepares for arrival of Omicron variant
2 Belgium zoo hippos test positive for COVID
Timuel Black Chicago: Memorial for Civil Rights leader | LIVE
Show More
Dancing Grannies make 1st public appearance since Waukesha tragedy
Man says he helped parents of accused Michigan school shooter
Chris Cuomo accused of sexual harassment days before CNN firing
Bob Dole, longtime public servant and WWII veteran, dies
New details on violent drawings reported before MI school shooting
More TOP STORIES News