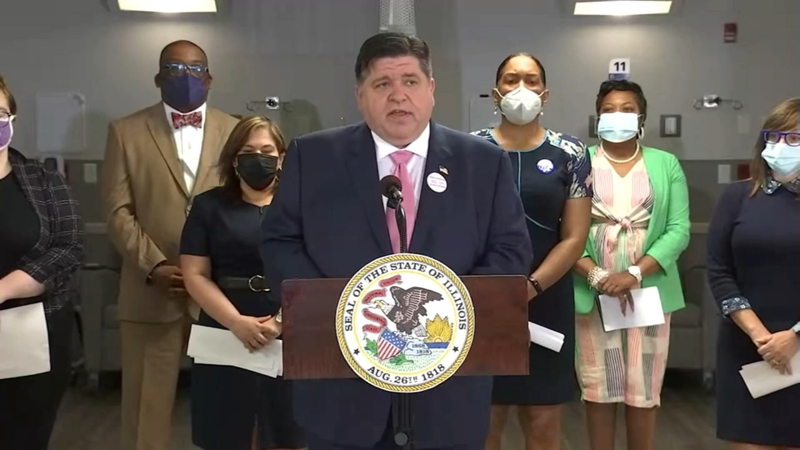 SPRINGFIELD, Ill. -- Illinois Gov. JB Pritzker on Wednesday urged Congress to act - and activists to take to the streets - to ensure abortion remains widely accessible even if the Supreme Court rolls back its 1973 decision in Roe v. Wade that legalized abortion nationwide.

The Democratic governor spoke from a Planned Parenthood Regional Logistics Facility in the Illinois suburbs of St. Louis. He said the U.S. Senate must step up in defense of the personal health care decisions of women. A test vote Wednesday failed 51-49.

"Women are under siege. Basic rights to privacy, to healthcare, to the rights of women to control their own bodies, are about to be stripped away," Pritzker said. "The world is watching. Here in Illinois, we trust women. To the U.S. Senate we say, 'Be like Illinois.'"

He finished with an offhanded pitch for protests, recalling how in her work for women's rights, his mother taught him "how important it is to turn protest into action." Later he emphasized they must be peaceful.

The debate over access to abortion - which has never fallen far from the top tier of political debate in the past half-century - has roiled the nation since Politico reported last week on a leaked preliminary opinion suggesting the Supreme Court will overturn Roe in a case over a Mississippi law prohibiting abortion after 15 weeks.

Overwhelming Democratic majorities that control the Illinois General Assembly have been preparing for a Roe rollback for years, particularly because the state would be a virtual island in an ocean of states eager to restrict abortions should the landmark 1973 ruling fall.

In 2017, they approved public funding of abortion and repealed a 1975 "trigger" law that committed the state to an abortion ban if Roe were overturned. Abortion became legal under state law after the Reproductive Health Act of 2019. Last fall, lawmakers dropped parental notification for minors seeking abortions, action that abortion-rights proponents considered the last roadblock to unfettered access in Illinois.

"We have been preparing for the day Roe falls and we are ready ...," said Yamelsie Rodriguez, president and CEO of Planned Parenthood of the St. Louis Region. "We are a safe place not just for Illinoisans, but for anyone who needs abortion in a post-Roe world."

The Regional Logistics Center, which provides travel, lodging, financial assistance and other help to out-of-state patients seeking abortions in Illinois, has helped 1,000 people from seven states since it opened in January, Rodriguez said. A clinic in Memphis, Tennessee, announced this week that it is expediting its plans to open an office more than 200 miles to the north in the southern Illinois city of Carbondale to ease the process for patients.

Additional legislative action includes a House-approved measure that would protect the Illinois licenses of medical professionals who face lawsuits or other sanctions from out-of-state interests if they perform abortions in Illinois.

State funding has supported Planned Parenthood for years. Pritzker said he wants that funding to increase and is studying whether state funds can go directly to patients who need help getting to Illinois.