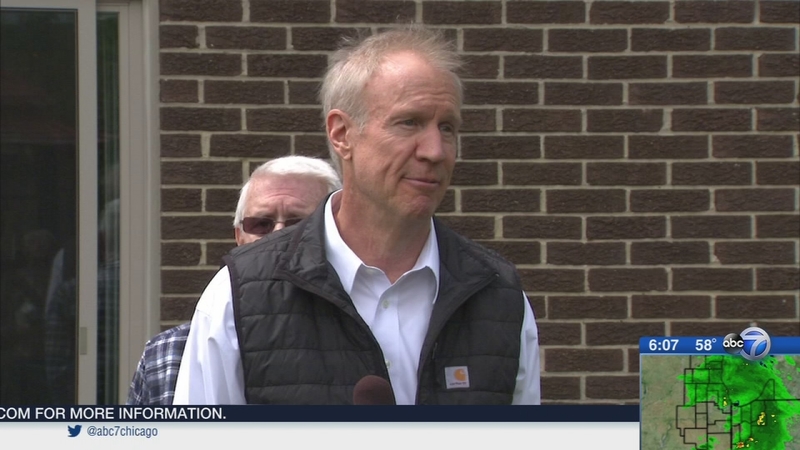 SPRINGFIELD, Ill. (WLS) -- Time is running out for Governor Bruce Rauner and the Illinois lawmakers. If they don't come up with a budget by next Wednesday, the state will enter its third year in a row without one.

Appearing in the South Suburbs on Friday, the governor said if the budget includes tax hikes, it must offer some relief to property owners. With less than a week to go before the legislative session ends, critics question why the governor is not in Springfield.

There is nothing more American than a suburban cul-de-sac and a property tax bill to go along with it. On Friday, one Orland Park subdivision served as the backdrop for Rauner's pitch for a property tax freeze something, he insists should be included in a budget agreement.

"We can't have the general assembly pass a massive tax hike on income and sales and not provide property tax relief that is true and lasting," Rauner said.

The governor's pitch was moved to Andi and Ken Borucke's back yard to avoid any interruption by "Tick Tock the Budget Clock," a character sent by the J.B. Pritzker campaign with a May 31 deadline to come up with a budget for the first time since Rauner took office, Democrats accuse him of avoiding Springfield.

"Unfortunately, the governor is nowhere to be seen doing his job to fund education," Mayor Rahm Emanuel said.

"I'm talking with members of the general assembly in both political parties every day," Rauner said.

From the beginning of his term, Rauner has said he will not pass a budget with tax hikes unless non budgetary reforms are attached but, the Civic Federation, a non-partisan government budget group, said the governor has yet to explain how a reform, like property tax freeze, would allow school districts that rely on that money to operate.

"The governor is free to argue for what he wants but with that comes a responsibility of articulating how the idea works," Laurence Msall, Civic Federation, said.

The Civic Federation said time has run out, going into a third year without a state budget is costing taxpayers billions of dollars in unnecessary interest and penalty costs for unpaid bills. Rauner said he is ready.

"I want this done now, there is no reason we should have done this two years ago," he said.

Although, with a few days to go, it doesn't appear Rauner and House Speaker Michael Madigan are close to cooperating with each other.