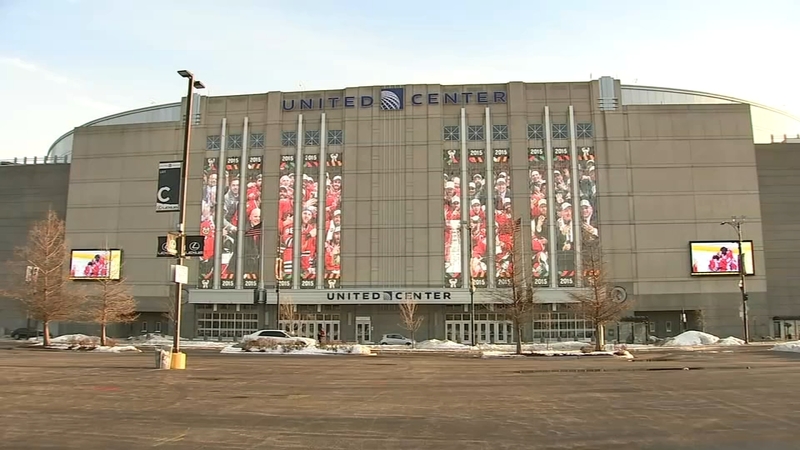 With the Bulls and Blackhawks still playing games at the United Center, the arena itself will not be used. Instead, the parking lots will be utilized for drive-through and walk-up vaccinations.

FEMA and the U.S. Department of Defense will take the lead on running the site with particular focus on vaccinating minority populations which have been relatively slow in getting doses.

Anywhere from 5,000 to 7,000 shots could be given daily, which is significant when you consider the city of Chicago currently receives about 8,300 doses a day.

"What you're looking at here is essentially increasing the vaccination rate for the city by about 50 to 70%, which is very, very significant." said Prof. Hani Mahmassani, director, Northwestern Univ. Transportation Center.

However, Mahmassani said if the goal is to reach more people in more areas of the city, a large central location may not be the best use of resources.

"Rather than having one facility that's vaccinating 7,000 people, I think it would be more effective to have seven facilities that are each vaccinating 1,000 persons per day," said Mahmassani.

Crews cleared the parking lot of snow Thursday night in preparation for the arrival of heavy equipment.

"They are ready, and they're ready to do whatever's needed to do in order to get people in and out and get their vaccines," 27th Ward Ald. Walter Burnett said. "You have a lot of good transportation with the expressway, the trains. You have two train systems, the Green Line and the Blue Line, buses. You also have a community that's used to having traffic in it."

Governor JB Pritzker's office said in a statement Thursday: "Governor Pritzker believes the Biden Administration's efforts to launch high capacity vaccination sites across the country are essential to equity, and he appreciates the robust collaboration with the President and his team. Our partners at Cook County and in the City of Chicago are also essential to our collective success, especially as we work together to make sure we're ready to use the increasing supply of vaccine in the most equitable way possible."

The United Center site is one of several federally-run mass vaccination locations planned across the country. There are others already in California, New York, and Texas.

Earlier this month, Chicago's public health commissioner said the city had completed planning and done walk-throughs at the United Center, as well as Wrigley Field and McCormick Place. But so far, there's no word if any additional large venues in Chicago will be utilized.

More details about the site, including how people can schedule appointments, are expected when the formal announcement is made Friday morning.

How much protection does the COVID-19 vaccine offer? How vaccinated people should approach seeing others

Illinois announced more than 130,000 vaccine doses were administered Wednesday, the largest one-day increase reported so far and a 36% increase over the previous record of 95,375 reported on Feb. 12.

The state reported 109,220 doses were delivered to providers in Illinois Wednesday. While down from Tuesday's record of 276,440, it is still higher than what the state has received in recent days.

Yet, multiple county health departments say it could be weeks before they're able to expand vaccine eligibility to people younger than 65 with underlying conditions, despite assurances from the state that supply will soon increase substantially.

Illinois has expanded 1B eligibility, but Chicago area health departments are holding off on the expansion until enough doses are available.

A long line extended outside Northlake's West Leyden High School Thursday, where 2,000 people were getting their first vaccine shot. There are 500 more on the wait list. Jemma Cabral, 41, was among the lucky ones. She got hers at 9:15 a.m.

"I'm a two-time cancer survivor," Cabral said. "I had a stem cell transplant, so I mean, even though it's been years ago, I still get sick easily. So it was important to me to get vaccinated."

Under Illinois rules, Cabral is part of Phase 1B plus, which now includes anyone over 16 with a pre-existing condition. Thursday was the first day people like her could be vaccinated. Except, vaccines are still so scarce not a single public health department in the area is expanding eligibility just yet.

"It's not just Chicago, it's Cook, and DuPage and Will and Evanston," said Dr. Allison Arwady, Chicago Public Health Dept. "We're not at a point where we are able to move ahead. If we opened it up, we'd make people happy for five minutes, then frustrate them because they wouldn't actually be able to get appointments."

Cabral got her appointment because the West Leyden clinic is being run by Albertson's. Participating grocery stores and pharmacies receive their vaccines directly from the federal government and can choose to allocate them to all who apply under state rules.

"I was a little worried when I went to put my birthdate in waiting for it to say, not eligible. But actually no, it was pretty smooth and easy to fill out," Cabral said.

Governor JB Pritzker is encouraging public health departments to expand eligibility as soon as possible, saying that by mid-March, the state will be receiving 100,000 doses a day. That's nearly twice as much, as it does now.

In Chicago, where public health officials say they are still nearly half a million doses short to cover phase 1A and 1B, no such expansion is expected to come until at least the end of March.

WATCH: Can your employer fire you for not getting COVID-19 vaccine?

ABC7 legal analyst discusses if employers can fire their workers for not getting the COVID-19 vaccine.

As of Wednesday night, 1,463 patients in Illinois were reported to be in the hospital with COVID-19. Of those, 334 patients were in the ICU and 168 patients with COVID-19 were on ventilators.

The preliminary seven-day statewide test positivity from Feb. 18-24 is 2.7%.

A total of 2,693,345 doses of vaccine have been delivered to providers in Illinois, including Chicago, with an additional 445,200 doses allocated to federal government partners for long-term care facilities, bringing the total number delivered in Illinois to 3,138,545.

The IDPH said that vaccine distribution numbers are reported in real-time and vaccine administration numbers lag by as much as 72 hours.

IDPH reports that a total of 2,440,950 vaccine doses have been administered, including 295,909 at long-term facilities. The seven-day rolling average of vaccines administered is 66,274.

The deaths reported Wednesday include: