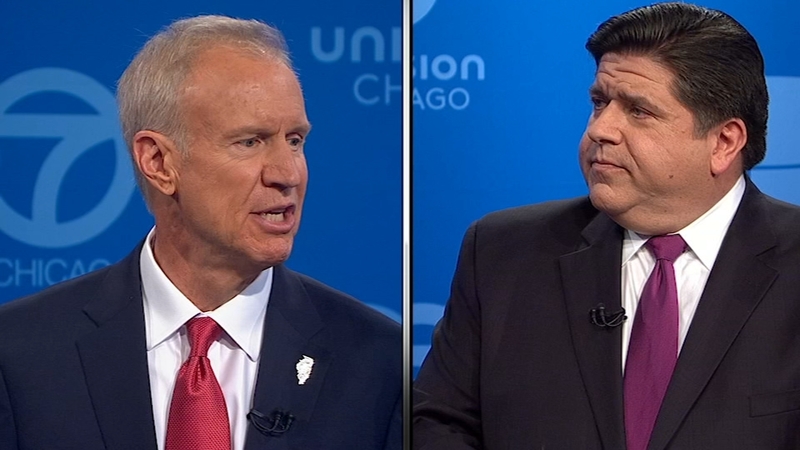 CHICAGO (WLS) -- Illinois Governor Bruce Rauner and his Democratic opponent JB Pritzker faced off in a debate hosted by ABC7 and held in conjunction with the League of Women Voters Wednesday night.

There are four candidates running for governor, but only Pritzker and Rauner will be debating. The League of Women Voters' longstanding criteria for candidates to be included requires them to be polling at 10 percent within 30 days of the debate as a gauge of voter support.

VIDEOS: JB Pritzker and Bruce Rauner debate at ABC 7 (1 of 4)

Part 1 of ABC7's Debate in the Race for Illinois Governor between Republican Gov. Bruce Rauner and Democratic candidate JB Pritzker.

Only Rauner and Pritzker were above that threshold in recent polls, including one released Tuesday.

The other two candidates are libertarian Kash Jackson and conservative William "Sam" McCann.

The debate got testy at times, with the candidates accusing each other of lying, covering up, dodging questions and twisting information for political gain.

Both Rauner and Pritzker found themselves on the defensive due to Pritzker's trouble with toilets and tax breaks, and a new report showing the Rauner administration delayed releasing information about the legionnaires' disease deaths at the Quincy Veterans home.

The governor denied a cover-up.

"The team determined the right time we needed to get all the facts, make sure that there was no panic or misappropriate information put out, and again what our focus was, was protecting or veterans, protecting our staff," Rauner said.

"Well this was a cover-up all along, remember Governor Rauner knew about this, his administration knew about it, days went by without notifying people, people got sick as a result of that," Prtizker rebutted.

"Mr. Pritzker, shame on you for politicizing the health challenges of our veterans," Rauner shot back.

Emails obtained by WBEZ radio showed his administration delayed notifying the public about the deaths in 2015, deciding instead to wait until reporters asked about it.

Meanwhile Pritzker, accused by the Cook County Inspector General of a scheme to defraud taxpayers by ripping out toilets to get a massive tax break, insisted it was all done legally.

"We sought a reassessment of the property just like 50,000 other people of Cook County," Pritzker said, before he was interrupted y Rauner.

"Do you believe those schemes deserve to be prosecuted, yes or no and why?" Rauner challenged.

Prtizker then called out Rauner, whose company at one time owned the Sterigenics plant in Willowbrook, which is under investigation for emitting cancer-causing gasses.

"Don't you think you owe the people of Willowbrook an answer," Pritzker asked. "What do you have to say to them about the fact that they've gotten sick during the time you've been intransigent about a company that you bought and you owned?"

"Mr. Pritzker I do not have any economic interest in that company whatsoever," Rauner rebutted. When Pritzker asked again, "Did you buy it?" he replied, "That is a false and that is a lie."

At the end of the debate the candidates made a person pitch to voters.

"You can choose four more years of failure or we can have a new day in the state of Illinois," Pritzker said.

"You can't reverse 40 years of corruption in just a couple of years, I'm asking for one more term," said Rauner.

Attacks between the two campaigns are only going to ramp up as Election Day approaches.

"But as you get closer to the finish line more people are going to be paying attention on a daily basis and I think with both of these candidates, And more importantly with the staffs they have, it's pretty good staff's on both sides, they're going to be going at each other tooth and nail," said political strategist Thom Serafin.

Lisa Madigan's office said Wednesday that the Attorney General has launched a criminal investigation into what happened in Quincy, and whether laws were violated and if people were in formed in an appropriate manner.

Serafin said the candidates have a lot at stake, and the way they handle themselves, and the questions, will have a ripple effect in the days and weeks ahead.

"The material that comes out of the debates, with all the resources on both sides, they can take those responses and reactions tonight and have everybody see them and hear them in 48 hours so it's important the performance, it's important on the issues," said Thom Serafin, political strategist.

Serafin said with Rauner trailing by 22 points in the most recent poll it's like being in the fourth quarter of a football game, down by four touchdowns.