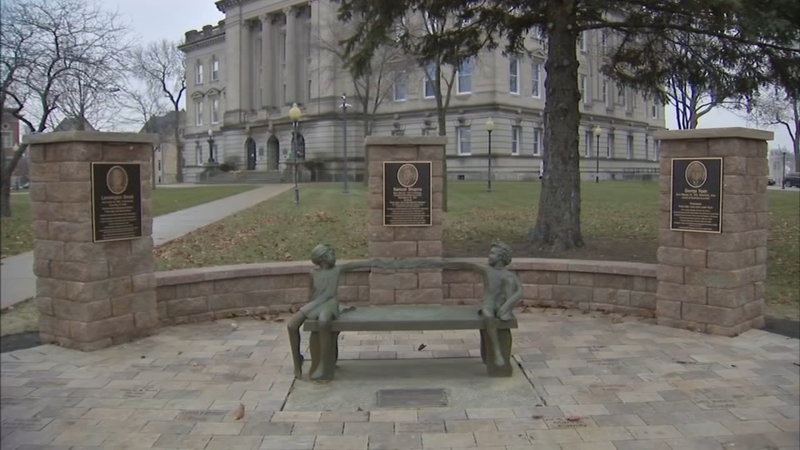 George Ryan, 2 other former governors from Kankakee honored despite scandals

A controversial monument was unveiled Thursday in Kankakee.

The Kankakee women's club raised more than $30,000 to build the wall and they continue to raise money by selling bricks that sit in front.

"We just wanted something no one else had, and the thing we could come up with was we had three governors from the city of Kankakee," said Dondi Maricle, the project chairperson.

The terms of two of the three governors, however, were tarnished by scandal.

Lennington Small, who served from 1920-1929, was accused of embezzlement but later acquitted. His relatives still own the newspaper in town. Great-grandson Tom Small still lives in Kankakee.

"He felt an affection for Illinois is practically not known anymore, and for the town," said Small.

Women's club leaders brush off criticism that the plaques are inappropriate.

"It's done. We need to move on. We need to celebrate the good in everybody's life because none of us are perfect," said Helen Defour, former women's club president.

Ryan also achieved international acclaim and was nominated for the Nobel Peace Prize after initiating a moratorium on executions in the state. The plaque below his picture makes no mention of that, or of his felony conviction.

"You can look back and find something somebody doesn't like, but I like to look at the positive things," said Mary Archie, current women's club president.

Ryan is rarely seen in public these days since his release from prison in 2013.

Ryan came out to help his hometown dedicate a wall honoring him and the two other Illinois governors from Kankakee.

"I'm humbled by it," he said. "The people of Kankakee have been good to me over the years, every time I ran. My family was here."
Report a correction or typo
Related topics:
politicskankakeescandalgovernoru.s. & worlddeath penalty
Copyright © 2022 WLS-TV. All Rights Reserved.
TOP STORIES
Death toll rises to 21, mostly children, in TX school shooting
Uvalde school shooting: What we know about 19 kids, teacher killed
Republican candidates for Illinois governor face off in 2 forums
Father of Texas yoga instructor accused in cyclist's murder speaks out
Chicago expected to move to 'high' COVID level by Friday, Arwady says
Gary teen killed in shooting identified by family
Chicago Weather: Showers and storms Wednesday
Show More
Woman shot near CTA Red Line stop on South Side
Biden says 'we have to act' after Texas school shooting
1 killed in 10-vehicle crash on I-294 in Glenview
Long COVID symptoms mainly affect women in their 40s, study finds
Watch Steve Kerr's raw, emotional plea after Texas shooting
More TOP STORIES News