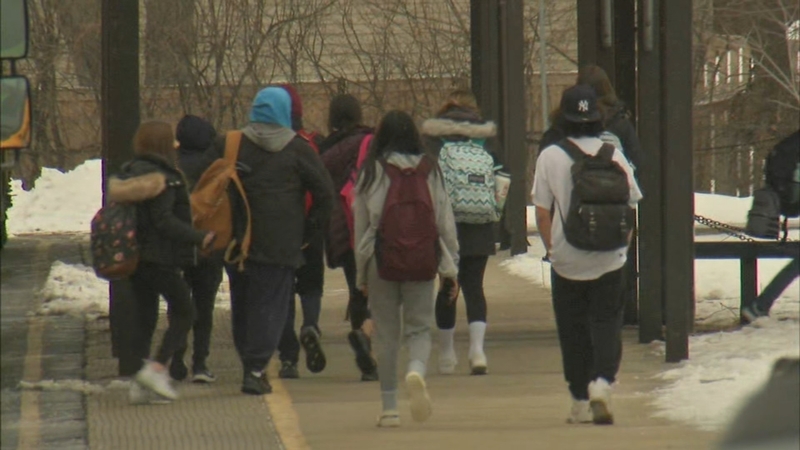 SPRINGFIELD, Ill. (WLS) -- The debate over masks inside of classrooms continues, as the state faces another setback in its effort to keep masks on students.

A bipartisan legislative committee voted to block an emergency rule issued by the Illinois Department of Public Health.

That rule would have forced districts to keep requiring masks until the appellate court makes a decision on a pending lawsuit, which could happen by the end of this week.

On Tuesday, the Joint Committee on Administrative Rules, or JCAR, made up of Democratic and Republican lawmakers, voted 9-0 to suspend the emergency mask rules, citing an ongoing court battle that resulted in a temporary restraining order, preventing dozens of school districts across the state from requiring students to wear masks in classrooms.

"I think the fact that the Democrats on the committee sided with us to suspend a motion on the rule is important; it's indicative of the fact that, I really think everybody thinks it's time to find an off-ramp to this pandemic and the mandates and everything imposed upon us since 2020. This offered up an opportunity to do that, I think," said state Rep. Steve Reick, R-63rd District.

Democratic state Rep. Curtis Tarver II, who voted with Republicans, said although he believes masking students inside classrooms is important to stop the spread of COVID, he also understands lawmakers have to wait out the judicial process.

It also comes less than a week after the governor's announcement that he would lift the indoor mask mandate for most public settings on Feb. 28, but not yet for schools.

Some Republican state representatives said this ruling leaves decision-making in the hands of local school districts.

Gov. JB Pritzker responded, saying he continues to urge all schools and parents to encourage mask-wearing "to keep everyone in their schools and communities safe."

Pritzker insisted Wednesday that lawmakers have not stripped him of his legal authority to require face coverings schools.

This decision temporarily suspends the emergency rule for schools across the state, not just those mentioned in the lawsuit, creating a new layer of confusion over masks in Illinois schools.

The court has asked all parties involved to submit briefs by 1 p.m. Wednesday.

Maine Township High School District 207 in Park Ridge said masks would be optional Wednesday in the district, after the JCAR decision.

Masks will still be required on any school transportation based on the federal Centers for Disease Control and Prevention order, the district said.

"The District reserves the right to re-institute mandatory mask wearing if local infection rates warrant it or if masking is required by law. We strongly encourage everyone to continue wearing masks to help us keep our schools safe and open as they have been all year. In addition, we are asking everyone to be respectful of the individual choices of staff and students to wear or not wear a mask now that we are in a mask optional environment," the school said.

An Appellate Court has been seeking clarification on a JCAR decision as Republicans have blamed Gov. JB Pritzker for confusion over masks in classrooms.

The continuing debate over school masking requirement has prompted walkouts in numerous school districts, and pushed other districts to go mask optional.

With the Appellate Court seeking clarification from attorneys about the significance of the JCAR decision, Attorney Tom Devore wrote that without the rule, the governor's executive orders "are merely hollow policy directives."

"When it gets to the point where school districts or citizens say, 'Sorry, Governor, your executive orders, we are not going to follow them.' The governor really has no ability to enforce any of that because the law doesn't provide any remedies," Devore said.

The Attorney General in his brief contended that the JCAR ruling "does not substantially affect the pending appeals."

"We're now trying to deal with a, you know, an errant decision by a judge in one county, one particular judge, you know, it's throwing everybody into a state of confusion," Pritzker said.

But some Republicans said Pritzker is to blame for the classroom mask mess.

"The governor has come to the General Assembly to ask us to pass legislation, to have a hearing on the mitigation strategies that we should have employed all this time. And we could have avoided a lot of this confusion if we had just started through the regular proper channels. And we didn't," said State Rep. Keith Wheeler, a Republican representing North Aurora.

The mom of an 8-year-old immunocompromised child has been pleading for school districts to stay masked a bit longer.

Claudette Cummings is in second grade, but the Wheaton 8-year-old has not stepped foot inside her elementary school in almost two years.

Claudette was born with a serious heart condition. She is fully aware of the risks if she contracts COVID-19.

"I will probably go to the hospital or maybe die," Claudette said.

The plan was for Claudette to return to school when she got vaccinated, but the Omicron surge put those plans on hold, until case numbers recently plummeted.

"We were set to go back this week on Monday, assuming everyone was masked," said Leslie Cummings, Claudette's mother.

But, everyone is not masked. Like many other school districts facing pressure from parents, Community Unit School District 200 has lifted its mask mandate, which means Claudette is not going back to a classroom anytime soon.

"It's not just that they are unmasked," Leslie said. "50% of kids in her age group are not vaccinated."

Leslie said the district has not offered her daughter 5-day per week remote learning. Claudette only gets one hour of tutoring a day through home health services. While parent protests against mask mandates have gained the attention recently, Leslie said she believes some school districts have ignored the voices of the immunocompromised.

"Their uncomfortable feelings don't trump my daughter's need to live that is the bottom line," Leslie said.

On behalf of her daughter and all high risk kids, Leslie has been pleading for school districts to stay masked a bit longer.

"We are very close to coming to a point where we all, including high risk kids be free, they are pushing this too soon," Leslie said.

While the mask mandate was lifted, School District 200 has continued to recommend wearing one in school. So does the CDC, the Illinois Department of Health and the DuPage County Health Department.