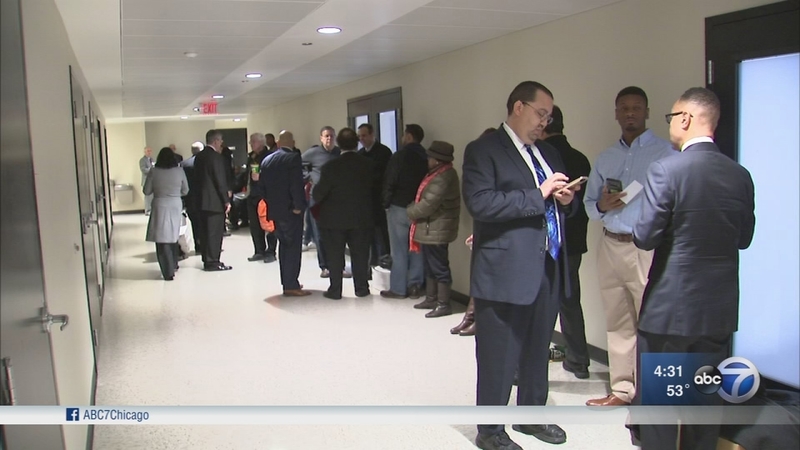 CHICAGO (WLS) -- The filing fury has begun for candidates running for office next year. Long lines greeted officials at the Cook County Clerk's Office when they opened Monday morning.

Candidates want more than to just get on the ballot, they want that coveted spot on the top of the list of candidates. And to improve their chances, many made sure they were at the clerks' office before they opened.

Dozens of candidates or their surrogates crowded the hall outside the Cook County Clerk's office. In Springfield, there was another long line outside the State Board of Elections for those running for state-wide office.
The goal: be in line before the doors opened to qualify for the lotteries which determine where a candidate's name appears on the ballot.

"There is some research, definitely first is better, I know some people say they like to be last, I've never found that to be smart. The worst is say, like you've got seven people and you're five," Cook County Clerk David Orr said.

The first in line at the Clerk's office, County Commissioner Dennis Deer, was appointed in July to fill the post created by the passing of Robert Steele. He said staffers got in line for him at 9:00 a.m. Sunday.

"This was planned. It is a tradition of our organization, President Bobbi Steele, Cook County Commissioner Robert Steele, now me," Deer said.

In Springfield, the three top Democrats running for Governor turned in petitions. J.B. Pritzker and Daniel Biss were there personally. Chris Kennedy's running mate Ra Joy made the trip for him.

On the Republican side, Bruce Rauner tweeted that his team filed their petitions. His primary opponent, State Representative Jeanne Ives, tweeted that she would file hers later this week.

The two challengers vying for Cook County Board President Toni Preckwinkle's job, Todd Stroger and Bob Fioretti, are still gathering signatures and so did not file their petitions Monday. Preckwindle filed hers and plans to challenge theirs.

"That's what I've done historically. My view is you've got to play by the rules of the game and in our democracy it's not enough to simply state you want to run for office, you have to go out and get the signatures of your constituents," Preckwinkle said.

The deadline for candidates to file their nominating petitions is Monday, December 4. After that comes the challenge process, something Cook County Clerk David Orr said always favors incumbents and is something he would like to see changed.