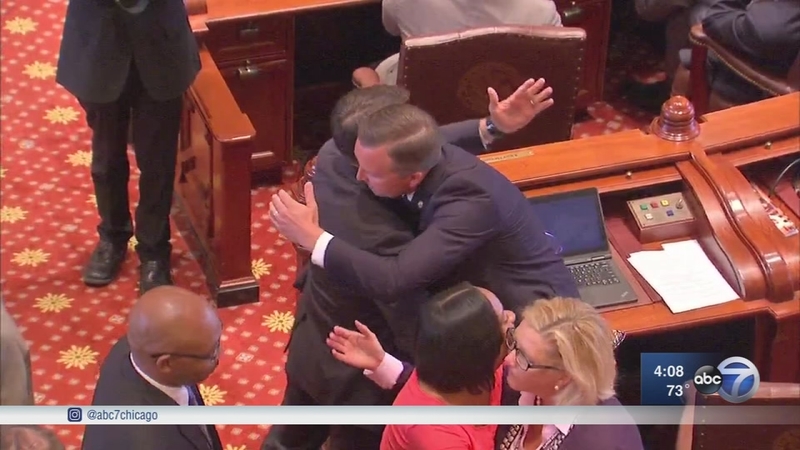 SPRINGFIELD, Ill. (WLS) -- The Illinois Senate voted Tuesday to approve a compromise education funding bill, which aims to overhaul the way public schools are funded for the first in decades.

The bill is now headed to Gov. Bruce Rauner, who said he will sign it on Thursday.

Neither Republicans nor Democrats were completely happy with the bill, but one day after the state House passed the bill, senators came together and voted to approve what is being called historic legislation for public school children across the state.

On Monday, the state House voted down Senate Bill 1947 before reconvening an hour later to pass the measure.

The Senate's 38-13 vote set off a round of applause in the chambers, followed by a series off handshakes and hugs by lawmakers on both sides of the aisle.

Rauner, who was in the chambers got his second victory in two days, but lawmakers said the real winners are the students in the state's 852 school districts.

"I think this is a moment that we all can be proud of," said Sen. Kimberly Lightford, D-Westchester. "None of us can say we love it 100 percent, but it actually gets the job done."

"We've disagreed often, but importantly we've come together in this bipartisan agreement and I'm glad we did," said Sen Jason Barickman, R-Bloomington

The vote means an overhaul in the way the state funds school, sending more money to poor and struggling districts around the state. It provides relief to Chicago for its legacy teacher pension debt and future pension payments, as well as provides a $75 million tax credit scholarship program for private schools that many Democrats opposed. Teachers unions also opposed the tax credit program for those who donated to private school scholarships.

"For me, it sets a problematic precedent that I fear will allow for a long-term systematic undermining of our public school system," said Sen Daniel Biss, D-Evanston.

"We are going say that we're are going to encourage people of means to contribute to scholarship funds to help kids of poor families get a better shot at the education that all of us say is so important," said Sen. Dale Righter, R-Mattoon.

But after a lot of partisan bickering during the process, the two sides praised the outcome.
"We knew this was a moment that we had to grab and not let go of. Today's vote is a culmination of monumental proportions," said Sen. Andy Manar, D-Bunker Hill.

Rauner, who was the Senate for the vote, said in a statement: "Our leaders worked together to provide school choice protection for parents who want the best education possible for their children. This is accomplished by ensuring that district-authorized charter schools receive equal funding, and by providing families with limited financial resources the same access to private schools. The Tax Credit Scholarship program encourages individuals and businesses to enable families to choose the school that best meets the needs of their children. This compromise also provides much-needed mandate relief for school districts and presents avenues for property tax relief. School districts will be given flexibility in how they schedule physical education curriculum and how they administer driver's education curriculum. In more affluent school districts, this bill provides taxpayers with a chance to lower their property taxes through the referendum process."