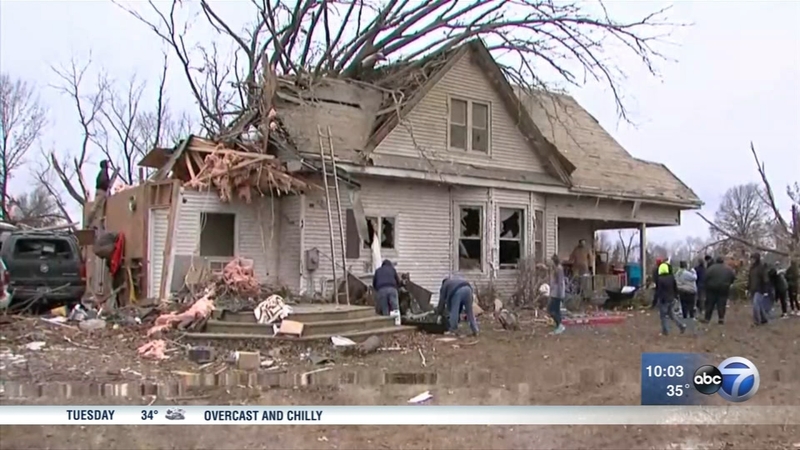 CHICAGO (WLS) -- Dozens of people were injured after at least 20 tornado touchdowns were reported in central Illinois Saturday.

There were two tornadoes running parallel to each town other near the town of Taylorville, where the most injuries and the worst damage occurred. Peak months for Midwest tornadoes are April and June; December is rare, especially with so many in one day.

There were at least 20 tornado touchdowns reported to the National Weather Service on Saturday, all in central Illinois.

"It's a miracle no one was killed in these tornadoes. Twelve counties were hit by the storms today and last night," Governor Bruce Rauner said.

Hardest hit was the town of Taylorville, which is about 30 miles southeast of Springfield and has a population of 11,000. At least 100 homes had major damage. Taylorville is the hometown of Congressman Rodney Davis, who toured the devastation with Governor Bruce Rauner Sunday.

"This is a personal event for me. This is something I didn't expect to witness in Taylorville, what small town America is about," Davis said.

With 22 twisters reported in Illinois, several residents captured tornadoes on video as they moved closer and raced through 12 counties. Residents and business owners assessed the damage afterward.
"This is one of my storage buildings on site, all three have some damage. As you can see this one is completely wiped out," business owner Bill Kinney said.

To provide help quickly, Governor Rauner is encouraging insurance companies to get involved immediately. He also hopes public monies can he used to help residents.

"We are asking everyone to keep receipts for the cost incurred from storms to maximize from the state and federal programs," Rauner said.

Cleanup in Taylorville is expected to last for months. The town's school district canceled classes Monday.

With hundreds of homes damaged, many remain without power Sunday night.