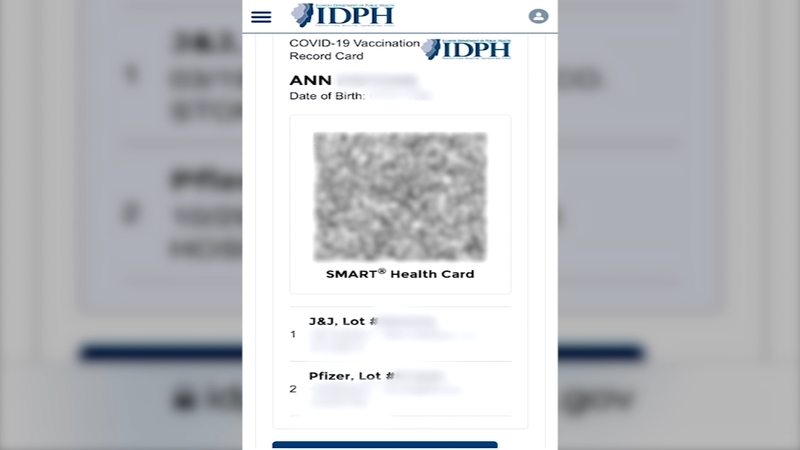 CHICAGO (WLS) -- The State of Illinois wants to make it easier for residents to show proof of vaccination by offering a new vaccination verification app. But the I-Team has found that won't be easy for everyone.

If you've been a victim of identity theft and wisely put a fraud alert on your credit cards, you'll also be frozen out of the state's vaccination verification app. We talked to a woman who can't get answers to that problem.

"I thought it would be easier to carry that on my cell phone versus carrying the COVID information card around with me," said Linda Andrews, of Park Ridge, of the state's Smart Health Card that launched in December.

The users' vaccination status shows up as a QR code, making it easy to show proof of vaccination. Just go to the Illinois Vax Verify Portal, put in your personal information, including your social security number, and the credit reporting company Experian, verifies your identity. Then, your vaccination status is uploaded on the SMART card platform.

Even with the help of her tech-savvy son, Andrews hasn't been able to use the system. That's because Andrews put a fraud alert on her credit cards after her identity was stolen.

"They said there was a fraud alert and they could not authenticate the information," she said.

For almost two years, the ABC 7 I-Team has reported on rampant unemployment fraud. State leaders say they've identified more than a million fraudulent claims, opened with innocent peoples' stolen identities, during the pandemic. Andrews, like most of those victims, took the proper steps to protect it by putting fraud alerts on their credit.

Andrews ended up with a message saying "Unfortunately, if you have a fraud alert in place, then you will not be able to use Vax Verify to retrieve your immunization record/SMART health card/QR code."

"I'm sure there are thousands of people throughout the state and who have experienced the same problems that I've had," Andrews said.
The I-Team contacted the Illinois Department of Public Health who told us "A fraud alert will prevent someone from registering in Vax Verify because it will not allow for Experian ID proofing, which is in place to protect a person's health information. For those unable to use Vax Verify to obtain a SMART Health Card/QR code, there are other issuers."

"If they could make this process a little bit easier I think it would be helpful to other people," Andrews told the I-Team.

The state's SMART Health card is only one of the vaccination verification apps available. The I-Team recently reported on platforms like Vax Yes and Clear.

Individuals can contact DPH.VaxVerify@illinois.gov or call the Vax Verify toll free number at 833-621-1284.