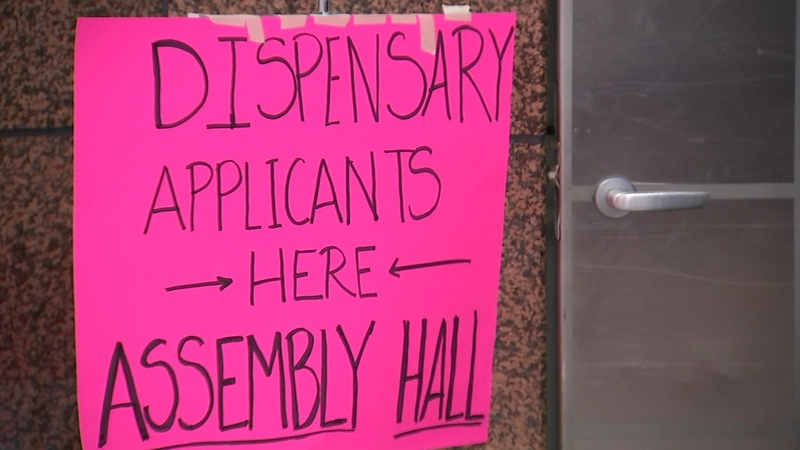 Weighing In: Which would you prefer, buying weed from a dispensary or from your local weedman?
EMBED More News Videos

Weighing In: Which would you prefer, buying weed from a dispensary or from your local weedman?

Thursday was another key day for the recreational marijuana industry in Illinois: it's the last day to turn in an application for one of the 75 available new dispensary licenses. Applications were due by 4 p.m.

In Pilsen, dozens of applicants piled into a bus to take them downtown. They joined many others hoping to be able to eventually cash in on the long lines and big demand that continued on the second day of legalization.

"So those lines actually show that there is an incredible opportunity to grow this industry, there is new room, there's room for people to come in and that's what's happening today," said State Senator Toi Hutchinson, who is also Illinois' cannabis czar.

Among the applicants was Layla Bitoy-Dillon, who lives in the Austin neighborhood. She already has a bistro on West Chicago Avenue, and a seasonal sweets shop across the street that specializes in high end popcorn, gelato and chocolate treats. Now she has a vision for more in 2020.

"You would also see our version, or flair, of an actual retail dispensary," she said. "As we move forward to the second phase of licensing we would actually like to infuse or create some of these similar related products to have on the shelf inside of that dispensary."

Bitoy-Dillon's husband submitted their application Thursday, joining dozens more on the final day. At the Thompson Center, the paperwork is being processed through the Illinois Department of Financial and Professional Regulation.

Some of the applicants said they are ready to begin operations within a month or two if they get a license.

Many are hoping to take advantage of the social equity portion of the Illinois recreational cannabis law. The social equity initiative aims to help those hurt by the war on drugs by prioritizing minority investors.

"Equity applicants have additional points in the application process," Hutchinson explained. "It's designed specifically to go towards these communities that were hardest hit, and we're really excited to see people filing in, bringing in their applications."

Among those interested in taking advantage of the social equity component of the law was Eron Leveston, who hopes to open a dispensary in the South Shore community where he is from.

"Well today is a great day," he said. "It's a day of celebration that we're finally finished. Of course, the waiting process is here now, but truly just to be a part of this historical moment, I believe, even having equity in this space in this industry, I think it's a great moment."

BItoy-Dillon called it an epic day.

"We missed New Year's because we were all working around the clock, so I'm hoping that after I get some sleep today the adrenaline and excitement will kick in and I can go celebrate," she said."

The state plans to award those licenses by or before May 1. In Chicago, successful applications will then have to wait to see if they win a lottery license here in the city.

It could take an additional couple of months after that before those dispensaries open for business.

There is another application deadline fast approaching as well. Applications for craft grow, infuser and transportation licenses will become available by or before January 7.

For more information about the Illinois Adult Use Cannabis Program, click here.