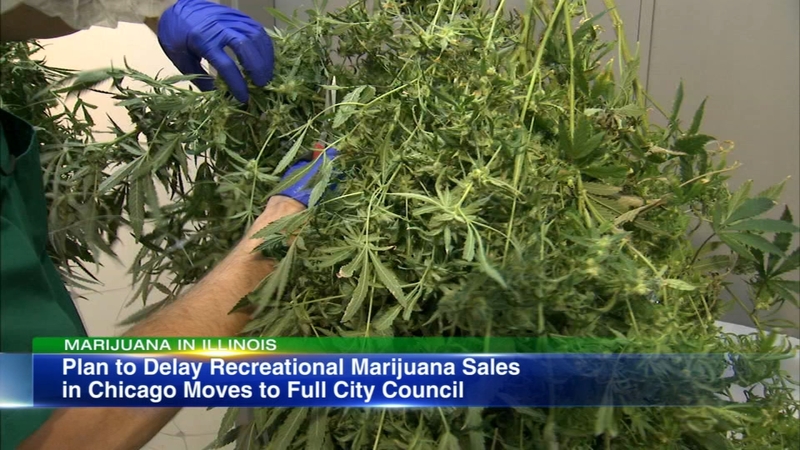 CHICAGO (WLS) -- A Chicago City Council committee has passed an ordinance that would delay the sale of recreational marijuana in the city.

The Committee on Contracting Oversight and Equity passed the ordinance, which would prohibit sales from starting on January 1, 2020, when the law legalizing adult-use marijuana goes into effect, and push them to July 2020.

The full City Council will have to pass the ordinance in order for it to take effect.
RELATED: Illinois Weed Legalization Guide

Nine Chicago medical marijuana dispensaries have received same-site licenses to start selling recreational cannabis on January 1. The city council's Black Caucus is concerned that none of those dispensaries are owned by African Americans, Latinos or women.

The Black Caucus released a statement in response to the ordinance passing committee, saying, "What we have seen here today is one step in the right direction. We are going to continue to work together and push for equity. In addition, we are looking forward to continue having ongoing discussions with the State and City. We thank our communities for providing us their support and being partners with us throughout these conversations "

Mayor Lori Lightfoot released a statement, saying in part, "Since October, my team has been working with the members of the Aldermanic Black Caucus to accomplish just that. From changes to the zoning ordinance to the additions to the enforcement ordinance, we have been addressing the Caucus's concerns since day one of this process and now, at a time when we can ensure cannabis becomes a galvanizing force for equity in Chicago, they move to delay its legalization by six months.

"Delaying sales will have a multitude of unintended consequences, including fueling illegal sales, placing the start of a new industry at the same time when our full public safety resources must be dedicated to combatting summer violence, and most importantly, stripping money from the social equity funds intended to benefit Black and Brown entrepreneurs."

"I have repeatedly asked the members of the Black Caucus to devise a strategy that addresses equity. Instead, we have primarily been met with a litany of complaints, but no tangible solutions. Crossing our arms and walking away is a tactic, not a strategy and is not only unacceptable but irresponsible. We have a tremendous opportunity to come together to do the work necessary to fulfill our vision of truly equitable legalization. Cannabis will be legalized across the State of Illinois starting on Jan. 1, and I have no intention of Chicago being left behind. It is unfortunate that the Black Caucus has chosen to remain on the sidelines."

The Illinois law has a social equity component that is meant to help people from areas disproportionately affected by the war on drugs to start their own cannabis businesses, as well as providing for reinvestment in these communities.