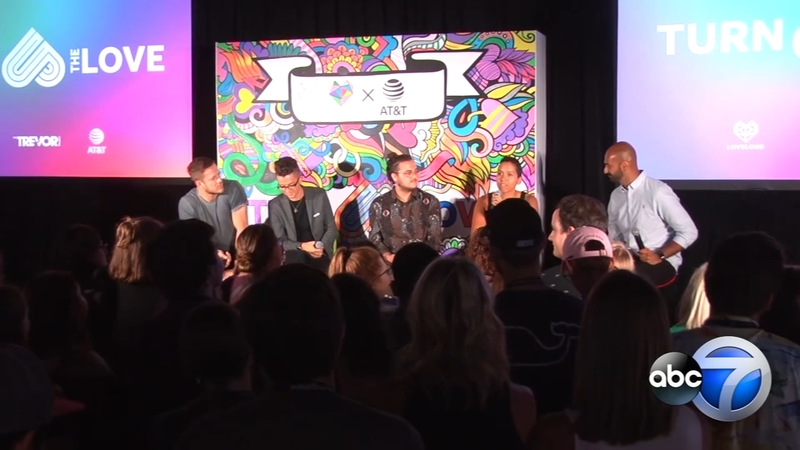 CHICAGO (WLS) -- "We all just want to exist and be heard and love. If you really understand that when you see someone else, you love them," said Imagine Dragons frontman Dan Reynolds amidst his mission to eliminate stigma around the LGBTQ community.

His work continued in Chicago Thursday night at AT&T's Michigan Avenue store with a panel of activists from the Trevor Project and Chicago's Center on Halsted.

"I think it started in middle school when one of my best friends was gay and Mormon, and I was raised Mormon...I saw the conflict that he lived with every day, that a lot of people deal with in religious communities, which is our LGBTQ youth are faced with having to choose between their innate sense of being, their sexuality, and then their faith; and nobody should ever have to choose between those two things," said the singer before speaking to the crowd of fans lucky enough to win tickets to the event.

His response was creating the LOVELOUD Foundation last year, bringing together activists, artists and music fans in Utah to foster inclusion at a music festival. Reynolds believes struggling youth should reconcile their faith and identity, not choose just one.

"I think that's a naive approach because that could put a kid in a more dangerous situation to tell them 'hey... leave your community' or '...possibly get kicked out of your home,'" he explained.

Holly Van Brocklin, in disbelief she won a ticket, drove from Michigan's Upper Peninsula to attend. The pan-sexual 18-year-old is grateful for Reynolds' work with her community.

"He is actually doing things, he's not just saying that."

According to the CDC, in 2015, lesbian, gay and bisexual students in grades 9-12 were nearly three times more likely to have had "seriously considered attempting suicide" than heterosexual peers.