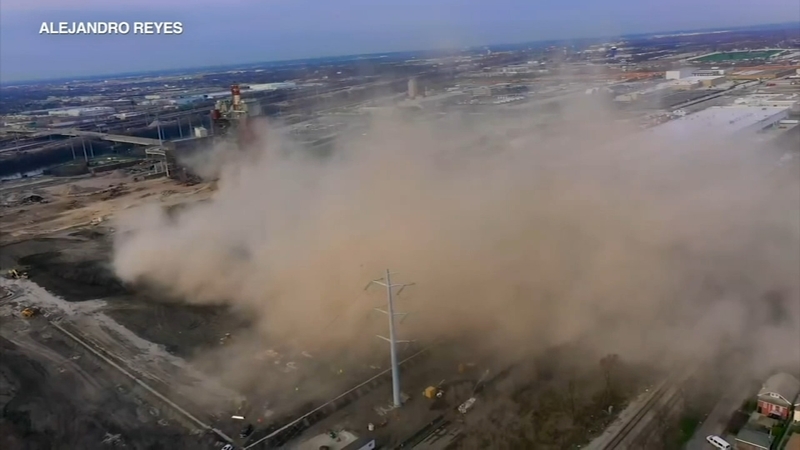 CHICAGO (WLS) -- Mayor Lori Lightfoot is taking action to address a smokestack demolition that left a Southwest Side community in the dust last weekend.

Residents in Chicago's Little Village neighborhood are concerned about the air they're breathing, and fear it's a public health hazard.

Lightfoot assured residents Friday that no asbestos was found in the air after the botched smokestack implosion.

The mayor said the developer of the site, Hilco Redevelopment Partners, and its subcontractors promised ahead of time they would meet demolition standards. But that didn't happen Saturday, when dust floated beyond the former Crawford Power Generating Station site and swirled over nearby homes.

While that and the developer's plans are under review, the city issued citations and halted all further implosions for 60 days.

Hilco said it has agreed to city requests, including street cleaning and handing out thousands of masks to residents.

Upon an initial review of the event, the city has issued 16 citations holding the developer and its general contractors, MCM and CDI, accountable for the incident. The parties owe up to $68,000 in fines, not including any other city claims relating to costs incurred by departments in responding to the incident.

As part of the new permit development process, led by the Department of Buildings and the Department of Public Health alongside the acting chief sustainability officer, city agencies will identify best practices from around the country, while soliciting input from residents, community groups, developers and elected officials. The city will also require the Chicago Fire Department hazardous material 511 unit to monitor air quality before, during and after an implosion, conduct a dry run of the implosion event with all contractors and regulatory agencies, prepare a dust mitigation plan tailored to the implosion event and engage in a robust multilingual community outreach plan leading up to the implosion.

Since Saturday, the city has taken multiple steps to hold the developer accountable and directed the developer to take swift action to clean and remediate the impacted area around the Crawford site. The developer has agreed to the following actions:


In addition to those efforts, the city also requested additional measures be taken out of an abundance of caution to ensure the health and safety of the surrounding community members. This included:


A class-action lawsuit was filed on behalf of Little Village residents after the smokestack was demolished.

Hilco has apologized for causing "anxiety and fear" after it failed to follow a plan it gave city officials that would've prevented the situation. They expected the implosion experts to use dust mitigation with water before, during and after the demolition.
The company said it is fully cooperating with the city while it investigates and is implementing "a thorough corrective action plan."

Videos and photos that circulated Saturday on social media showed a tower falling to the ground, releasing a heavy cloud of dust that eventually seeped into residential areas. One photographer described the scene as "like something out of the movies."