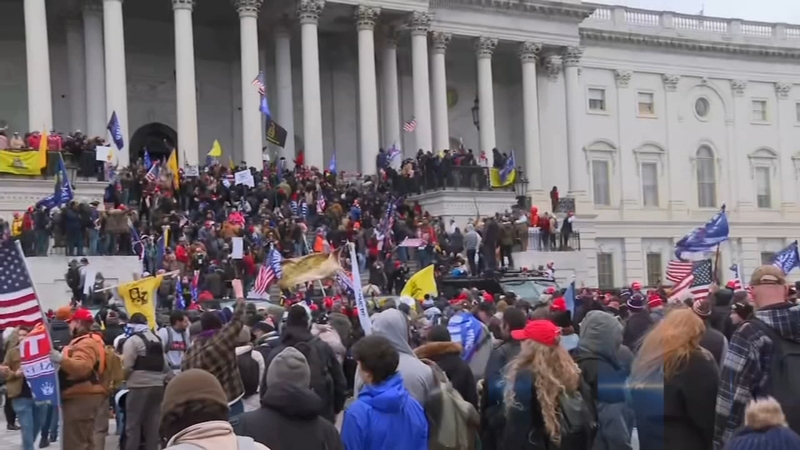 IN woman avoids jail in 1st US Capitol riot sentence

WASHINGTON -- A Trump supporter who spent 10 minutes inside the US Capitol during the Jan. 6 insurrection was sentenced to probation Wednesday, avoiding jail, becoming the first rioter to learn her punishment in the riot investigation.

At a hearing in DC federal court, Judge Royce Lamberth said the insurrection was a "disgrace" and forcefully rebuked the "utter nonsense" coming from some Republican lawmakers and other right-wing figures who are whitewashing what happened, CNN reported.

"I don't know what planet they were on," Lamberth said of the GOP lawmakers, without mentioning any names. Recent releases of videos from the attack "will show the attempt of some congressman to rewrite history that these were tourists walking through the capitol is utter nonsense."

Anna Morgan-Lloyd, 49, from rural Indiana, had pleaded guilty to a single misdemeanor for trespassing inside the Capitol as part of the crowd on Jan. 6. She was also assessed a $500 fine.

Lamberth said Morgan-Lloyd avoided jail time because she didn't participate in the violence and condemned those who did. He issued a warning to other defendants that he'll likely sentence them to jail time if they continue defending their behavior at the Capitol.

"Some of these defendants are not going to do what you did. They're not going to say they did anything wrong. They, to this day, would still participate in the demonstration," Lamberth said. "... I don't want to create the impression that probation is the automatic outcome here, because it's not going to be."

Still, the judge said what happened on Jan. 6 was "a serious crime" and a "disgrace" to the country. He praised the media for its coverage of the assault and pointed out that "much of the public remains outraged at what occurred."

"This wasn't a peaceful demonstration... it wasn't an accident that it turned violent," he said.

It's a benchmark moment in the massive federal probe that has ballooned to comprise nearly 500 defendants from 43 states.

As the sweeping investigation approaches its six-month mark, the Justice Department has moved to resolve a few of the hundreds of federal cases. Prosecutors had secured seven guilty pleas as of Wednesday afternoon and have more scheduled for the coming weeks, giving some insight into negotiations happening behind the scenes and how dozens of defendants likely could be facing years in prison, depending on their actions during the siege.

The initial set of plea deals and the sentencing are likely to serve as a warning shot as the national dragnet continues in what the Justice Department has described as one of its largest investigations ever and a major law enforcement effort to address domestic terrorism. Also Wednesday, an Oath Keeper conspiracy defendant pleaded guilty.

Wednesday's sentencing for Morgan-Lloyd won't set the standard for most of the riot cases, as Lamberth noted. But hundreds of other rioters are charged with felonies for assaulting police, taking weapons to the Capitol, destroying property or -- if they went into protected areas of the building -- obstructing the official congressional proceedings to certify the Electoral College vote. Prosecutors so far appear to be unwilling to wipe away that level of charge.

One man who went inside the Senate chamber for 15 minutes faces a recommended 15 to 21 months in prison, according to court records. Another man who allegedly posed for photos with his feet on a desk in House Speaker Nancy Pelosi's office, carried a taser and stole an envelope from the office, could face nearly six years or more in prison, prosecutors have said.

First to be sentenced

Morgan-Lloyd was initially accused of four federal crimes, but court filings indicate that she reached a deal with prosecutors, who recommended three years of probation, a $500 fine to cover damages to the Capitol complex and 40 hours of community service.

The Justice Department laid out several factors why incarceration isn't warranted: Morgan-Lloyd didn't plan or coordinate with others before Jan. 6; she didn't get violent during the riot; she was only in one hallway for 10 minutes; she immediately cooperated with investigators when they came knocking; she expressed strong regret; and she doesn't have any criminal record.

On the day of the attack, Morgan-Lloyd posted on Facebook that it was the "best day ever," according to her court filings, but in advance of the sentencing she submitted a letter to the judge saying she had reshaped her political views since her arrest and was grappling with a family member's Holocaust denialism.

She said she has spent her entire life in a "very small town" in southern Indiana, which gave her a "sheltered life" that made her out of touch with "what life is like for others in our country." She claimed she had gone through a political transformation after her attorney urged her to learn about racial inequality by reading books and watching movies.

It is common for defendants in criminal cases to tell judges before sentencing that they've experienced changes of heart, in bids to get light punishment. Morgan-Lloyd made that case in her letter, apologized for her crimes and disavowed the rioters who had attacked police officers and trashed the building.

"I felt ashamed that something meant to show support for the President had turned violent," Morgan-Lloyd wrote to the judge. "This is not the way to prove any point. At first it didn't dawn on me, but later I realized that if every person like me, who wasn't violent, was removed from that crowd, the ones who were violent may have lost the nerve to do what they did. For that I am sorry and take responsibility. It was never my intent to help empower people to act violently."

After watching "Schindler's List," she criticized her son-in-law for downplaying how many Jews had been killed in the Holocaust. She also said she now opposes the death penalty after reading "Just Mercy," a book about wrongful convictions of Black Americans.

"I've learned that even though we live in a wonderful country, things still need to improve," Morgan-Lloyd said. "People of all colors should feel as safe as I do to walk down the street."

Her lawyer, Heather Shaner, said Wednesday on CNN's "New Day" that Morgan-Lloyd "was uninformed and misinformed" before storming the Capitol but the book and movie assignments taught her about "the relationship between the citizen's rights and the citizen's responsibility."

Other Capitol riot defendants have already pleaded guilty to similar one-count low-level charges, but because of how judges determine when sentencings can happen, Morgan-Lloyd was the first.

Others, Bryan Ivey of Tennessee and a married couple, Jessica and Joshua Bustle from Virginia, also agreed to allow law enforcement to examine their social media accounts and said they would pay $500 each in restitution for damage to the Capitol by the crowd. The Justice Department has estimated the damage at $1.5 million, according to court records. Robert Reeder, a Maryland man who previously worked for the Transportation Security Administration, pleaded guilty on Wednesday to a misdemeanor charge of illegally demonstrating inside the Capitol.

Even with one rioter's case closed in court, investigators are still pursuing hundreds of leads and seeking dozens of people. Also, a person caught on video leaving pipe bombs near Capitol Hill has not yet been found.

Prosecutors have charged additional defendants almost every day since the attack and recently indicated in court filings they continue to pursue as many as 100 more.

The cases, taken together, have provided more insight into the pro-Trump rioters' political inclinations, and the Justice Department has noted that the threat of right-wing rhetoric pushing ideas of election fraud and reclaiming the presidency from Joe Biden hasn't subsided.

Lawyers for one defendant said he had watched six straight months of Fox News and contracted "Foxitis." Another rioter, who allegedly shouted at police, "You guys like protecting pedophiles," an apparent reference to the baseless QAnon conspiracy theory, had been convicted in 2010 on a state charge of unlawful sex with a minor, and others charged with assaulting police are police themselves.

Prosecutors have also continued to expand conspiracy charges against far-right extremist groups that they allege coordinated and planned to disrupt Congress' certification of the presidential vote. More than 50 defendants have been linked to far-right extremist groups, and at least two groups of alleged conspirators are accused of finding contacts online, then discussing how they'd travel cross-country with firearms for the event.