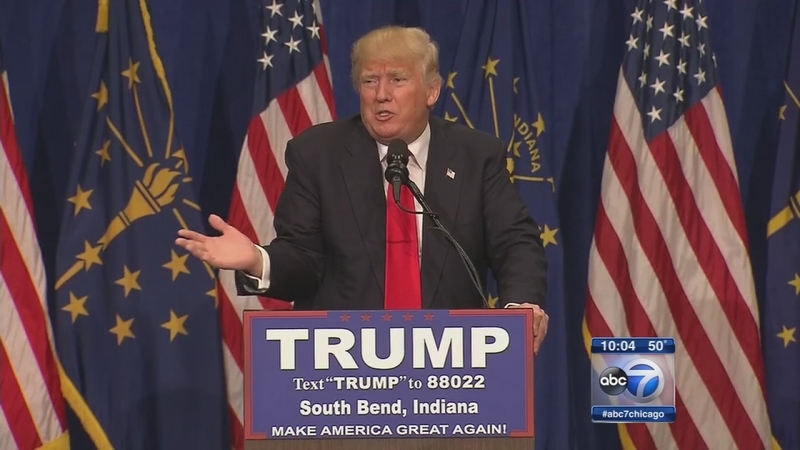 SOUTH BEND, Ind. (WLS) -- In the race for the White House, all eyes are on the Hoosier state. Voters in Indiana will go to the polls Tuesday in what could be a make-or-break primary.

Experts say a decisive win by Donald Trump in Indiana could clear a path to the nomination and avoid a contested convention.
EMBED More News Videos

Donald Trump supporters and protesters are turning out for his rally in South Bend Monday evening.

On Monday evening, Trump supporters and protesters turned out in droves for his rally in South Bend, Ind.

Trump told a capacity crowd that spilled into two overflow rooms that Hoosiers have been hammered by the outsourcing of jobs overseas.

"When people want to lay off 1,500 people, with no taxes, no consequences, that's not going to happen," Trump said.

The show after the show saw anti-Trump demonstrators square-off against supporters of the billionaire businessman.

"All he's going is hating on people, we need leadership in this country," said Allison Townsend, a Trump protester.

"They don't like my personality? Who cares?" Trump said.

Trump told the crowds in Indiana Monday night that if he wins on Tuesday, the nomination is his and he will immediately begin turning his attacks on Hillary Clinton.

TRUMP DRAWS SUPPORTERS FROM ACROSS MIDWEST

"Back in the day, I voted for hope and change. That didn't happen. You got dope and broke," said Chet Pala, of Chicago.

"He makes me proud to be an American and I support him 100 percent," said Lisa Prosk, of Lake Zurich.

"Donald Trump has proven himself to be quite successful in the area of business, in the area of plenty of other things. So, yeah, he has my full support," Robinson said.

Before the rally began, a small, but vocal group of anti-Trump demonstrators shouted "love thy neighbor" and other not-nearly-as-nice statements. Some carried Mexican flags, and one shouted down our interview with a Trump supporter from Chicago.

"I went to the rally in Chicago and this is what I'm talking about. They didn't practice civil disobedience, you know, you don't see this at a Bernie Sanders rally," said Gary Snow, a Trump supporter, before a protester cut in, shouting: "You're a racist!"

"I could not sit still, I couldn't sit still. This bully came to my town, South Bend, that I'm passionate about. I have eight grandchildren 11 and under, and I've taught them not to be bullies. And this is the biggest bully of all," said Jodey Freed, a Trump protester.

Throughout the crowd, you'll see the simple red hat that Donald Trump made famous. While his official merchandise is made in the USA, street vendors are selling "Make America Great Again" hats made in China.

"America is great, I think he's trying to put the icing on the cake," said Mike Wittlieff, a Trump supporter. "You want to see where it was made? I got it here on the corner. (But it says made in China.) "I know. I was looking for one American made. I looked. I guarantee you there's not one in this town."
EMBED More News Videos

Donald Trump is holding a rally in Carmel, an Indianapolis suburb, before heading to another rally in South Bend Monday evening.

As supporters waited in South Bend, the billionaire businessman campaigned in Carmel, Ind., trying to build on what a late poll suggested is a double-digit lead over Senator Ted Cruz.

"Honestly, if we win Indiana, it's over. It's over. They're finished, they're gone," Trump said.

Senator Cruz, campaigning in Marion, was confronted by a Trump supporter.

"Do the math. Kasich dropped out, its your turn," the Trump supporter said.

Later in LaPorte, Ind., Cruz was confronted by Trump supporters.

CRUZ: "Apparently there's a young man who's having some problems."
BOY: "You suck."
CRUZ: "Thank you son."

"I could not be more encouraged that this primary is coming down to the Midwestern common sense to the good judgement of Hoosiers," Cruz said.

In a tweet, candidate Trump wrote: "I will be campaigning in Indiana all day. Things are looking great, and the support of Bobby Night (sic) has been so amazing. Today will be fun".

Back in South Bend, those in line don't let misspellings or other media observations of their candidate affect their support for Donald Trump.

"I think after Reagan, this country started going downhill at that point. And right now, we have a chance to go back to where we were before. I think Donald Trump is the guy who's going to do that," said David Huser, of Indiana.