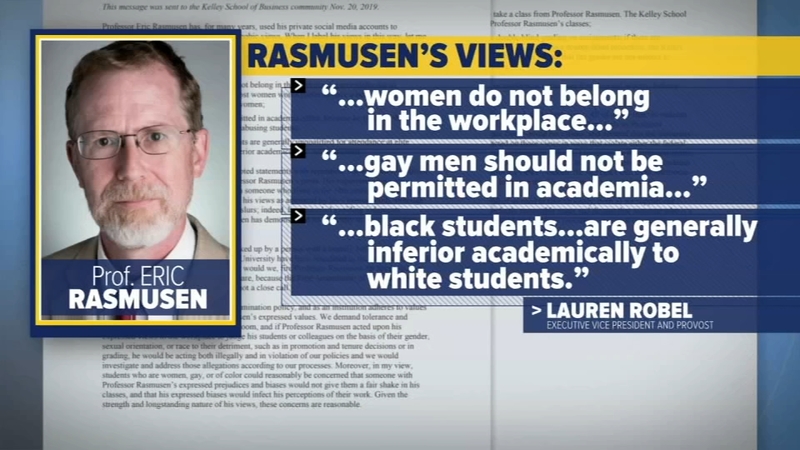 Earlier this month, business professor Eric Rasmusen, shared an article on Twitter arguing women may be destroying academia and quoted the article, writing in part "geniuses are overwhelmingly male."

"I linked to an article saying that women were hurting academia, but I wasn't saying I agreed with that article," Rasmusen said.

The tweet went viral and the university was inundated with demands that he be removed.

"For a professor, to have those views and say them so publicly is really disheartening and very, very disappointing," said IU sophomore Brandon Barnes.

In a scathing letter, the school's executive vice president and provost, Lauren Robel, says Rasmusen, who has been teaching there since 1992 and has tenure, has pushed bigoted views on social media for years. Posts such as "women do not belong in the workplace," that "gay men should not be permitted in academia" because they're "promiscuous," and "that black students are generally inferior academically to white students."

She also says he will not be fired.

"We're a public institution and unlike private employers, we're bound by the First Amendment of the Constitution," the Robel added.

Now Rasmusen is now speaking out, saying his views are being misrepresented and said his critics are overreacting.