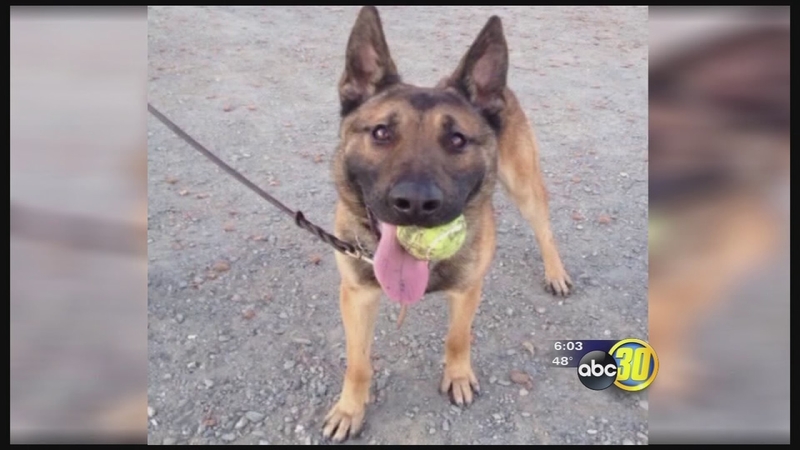 MERCED, Calif. -- Maximus the Malinois is a highly-skilled member of the Los Banos Police Department

The police dog is also a member of Westbrook's family. He handpicked Maximus from a pack of pups that arrived from the Czech Republic in 2012 and said they had an instant connection. "As soon as I saw Maximus it was like that's it, we're done," Westbrook said. "I'll take him."

Since then, the partners have done everything together, from training trips to family outings. "We're together pretty much 24/7," Westbrook said. "He comes home with me, he goes to work with me, he rides in my car, he rides in my truck. If we go camping, he goes, if we go to the kids soccer game he goes, he's actually one of the kids."

But now this inseparable pair could soon be split up.

Westbrook suffered a serious knee injury while struggling with a suspect last year, and it appears he'll have to retire for medical reasons after 17 years with the department. However, Maximus is one of just two police dogs the city has, so he's expected to stay on the job -- with a new officer and a new home.

"It's adding to the heartbreak of it because we're so close and we're so bonded," Westbrook added.

But there is still hope. Westbrook was offered the chance to buy Maximus for $15,000. Police officials say they can't comment because it's a personnel issue, but Westbrook believes that's the amount a private donor paid to purchase and train Max initially. He's now set up a GoFundMe account to try to keep his companion.

"If you can help us in any way that would be fantastic," Westbrook said. "And if you can't if you can go on the GoFundMe page and pass it on to everyone else, that would truly help."

Westbrook is hoping to raise the full amount in the next 30 to 45 days. If he doesn't reach the goal, any money he receives will be used to buy bullet-proof vests for other K-9's.