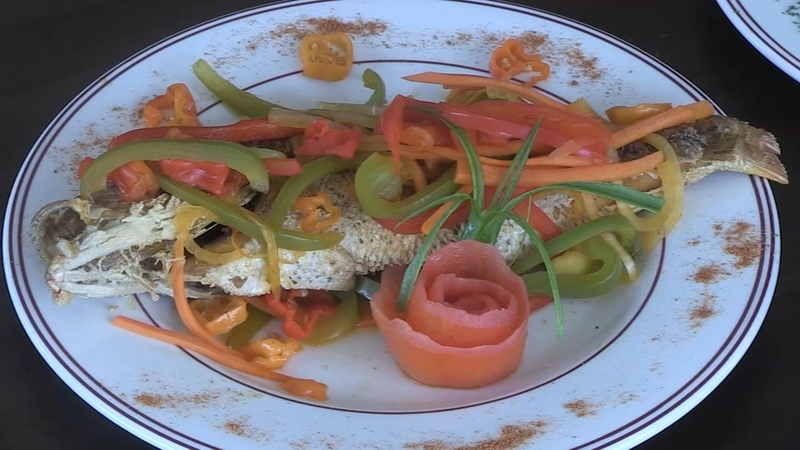 CHICAGO (WLS) -- Jamaican Independence Day is Monday, and for our Hungry Hound, that means it's as good excuse as any to dive into some jerk chicken.

He says a relatively new Jamaican restaurant in Wrigleyville is doing things the right way - from scratch - and also offers a few other Jamaican classics.

The smell of allspice and scotch bonnet peppers dominates the kitchen at Irie Jerk Bar & Grill. That's because they're making their jerk sauce from scratch, then smoking chickens throughout the day.

Even if spicy food isn't your thing, there are plenty of other Jamaican dishes on their extensive menu to get you into the island spirit.

The smoke is almost overwhelming, if you're not used to it. A tiny grill in the basement kitchen of Irie Jerk Bar & Grill, just a few blocks south of Wrigley Field, is the most important piece of equipment, since it's the one thing the cooks need to finish their jerk chicken. The recipe, a remnant of slaves who fled the British into the hills of Jamaica, and needed to preserve their food, calls on the indigenous ingredients from the island: allspice - also known as pimento - as well as scallions, colorful (and hot) scotch bonnet peppers are among the most important.

"From the onion to the pimento to the scallion to the thyme, it's all natural stuff, so that's what brings the flavor and the healthiness out of it," said Kevin Grossett, the co-owner.

Along with vinegar, everything is blended until it forms a paste, which is then applied to the chicken as a marinade. Cooking low and slow over smoke is important; just as important, serving it with appropriate sides like festival - sort of an unsweetened cruller - plus rice and beans, mac and cheese or cabbage.

Oxtail is another national favorite, as are jerk pork, whole fried fish and callaloo - a sautéed green that's as common as a rum punch or a bottle of Red Stripe beer. But the other truly local dish - most would call it the national dish of Jamaica - is ackee and saltfish. Imported cod and that all-important ackee, a fruit that, when cooked, resembles scrambled eggs, is frequently on the menu, but especially during Independence Day.

"Jamaican national dish: ackee and saltfish," said Grossett. "And it's a seasonal product so they ship it in bulk over three or four times a year so we store it, we get it, it's very hard to get."


In Steve's Extra Course Video, he takes a closer look at two of the tropical drinks inspired by Jamaica at the restaurant.
EMBED More News Videos

In Steve's Extra Course video, he takes a closer look at two of the tropical drinks inspired by Jamaica at the restaurant.