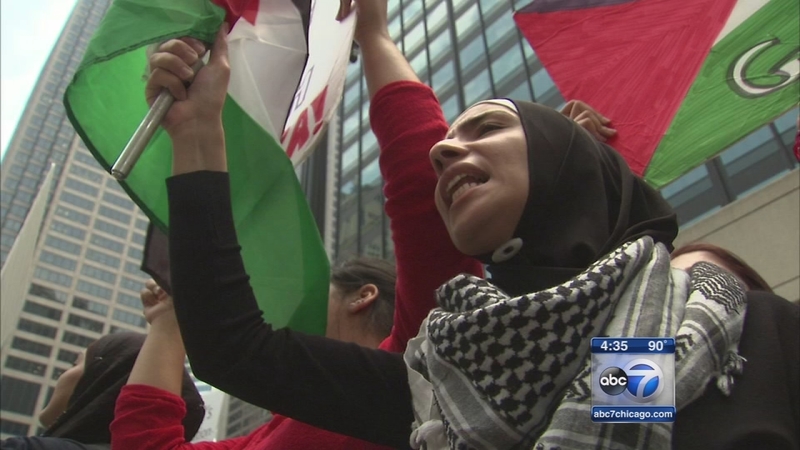 CHICAGO (WLS) -- Conflict in the Middle East forced the cancellation of all flights to Israel's main airport Tuesday as Israeli and Palestinian supporters marched in downtown Chicago.

Several international airlines have joined U.S. carriers in temporarily halting flights in and out of Tel Aviv, despite assurances by Israel that the airport is safe.

On Tuesday night, the violence in Israel and Gaza is impacting global air travelers including clients of Rogers Park travel agent Sue Biver.

"You have to go by what the airlines are saying, and their situation. They don't know what's going on, too," said Biver.

Israeli Prime Minister Benjamin Netanyahu appealed to Secretary of State John Kerry Tuesday night to reverse the FAA's 24-hour ban on U.S. airlines flying in and out of Israel after a rocket fired from Gaza landed about a mile from Tel Aviv's international airport, and days after a Malaysia Airlines plane was shot down over Ukraine by a missile.

Among those from our area now stranded in Israel is David Brown of the Jewish Federation of Metro Chicago.

"Obviously the chances of a rocket coming and hitting a plane when there is no missile, this is not the same circumstances as what just happened in Ukraine, but I can't tell the airlines how to run their businesses and now I'm booked on another flight," said Brown.

There were dueling downtown Chicago rallies as supporters of Israel and the Palestinians were separated by police outside the Israeli consulate. Under heavy security, hundreds of pro-Israeli supporters brought their flags, family and friends to rally in support of a country they call their Jewish home.

"Since I'm not there, I needed to come here and stand with Israel," said Orah Frankenthal, Israel supporter.

"It's important for the Israelis, to show them there is a larger community here supporting them," said Andrew Bloom, Israel supporter.

Support must come from here because for at least the next 24 hours, there is no way to get to Israel from America after a rocket from Gaza landed near the airport. The FAA is not allowing any U.S. airline to fly into the Tel Aviv airport. Scott Schrieber has a trip planned to Israel on Friday.

"Hopefully, it is a short-term cancellation. This is the time to go to Israel, not to stay away from Israel," said Schrieber.

In the third war in just over five years, the Israelis have been fighting the Hamas militants in the Gaza strip. Audrey Weisberg just returned from Israel, while others at this rally are worried about family over there.

"I was there and two sirens went off, which is unusual because Jerusalem is usually very quiet," said Weisberg.

"If you have airlines canceling flights to Israel because they are afraid of missiles, imagine the people who live there and are running to bomb shelters," said Frankenthal.

But Palestinian supporters say their relatives in Gaza are living in fear as well. With a police shield between them, hundreds of protesters chanted across the street blaming Israel for killing Palestinian civilians.

"These people who are supporting war in our city, we're going to counter them every time they come out here and try to support war," said Hadem Abudayyeh, Coalition for Justice in Palestine.

The heated standoff ended with police moving people along, though one man at the rally was arrested for allegedly carrying a gun.

Police say that man who was allegedly armed did have a concealed carry permit, but even with one, it's illegal in Chicago to bring a gun to a public rally. Misdemeanor charges are pending.