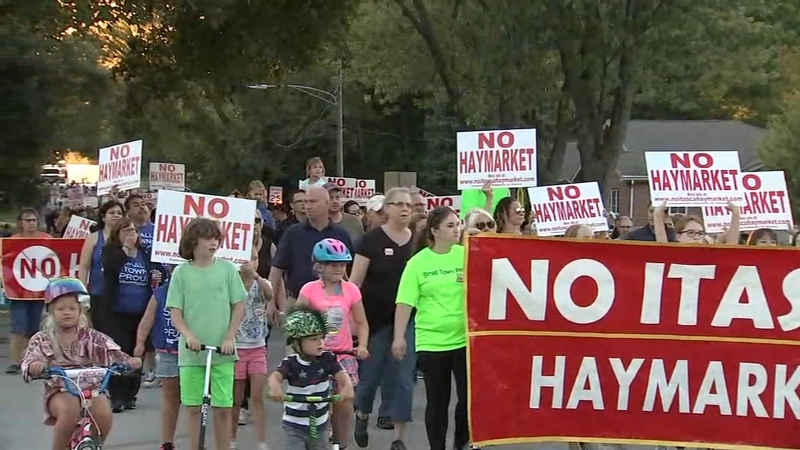 ITASCA, Ill. (WLS) -- A protest was held Wednesday night in west suburban Itasca over a proposal that would turn a Holiday Inn hotel into a rehab facility for addicts.

The hotel is not far from a school, which has some parents in DuPage County fighting the transformation.

Those against a drug and mental health treatment facility moving into Itasca wanted to make a strong statement Wednesday night to village officials.

"There is just too many negatives about what's going on with this," said Robert Cerrito, resident.

There was massive turnout at the public hearing on Haymarket Center's proposal to take over the Holiday Inn and offer treatment for people battling addiction. Some residents are concerned about the loss of tax dollars from the hotel and public safety.

"It is too close to schools, to libraries, to the pool and to the train," said Jean Angelopolulos, resident.

Supporters countered, saying the facility is needed in the community. Dominic Ranieri is an Itasca resident and a Haymarket patient in recovery.

"I just hope they understand the severity of this," he said. "I pray they are never in the position that most other people have to be in."

The intensity outside turned into disappointment inside for both opponents and supporters when the plan commission made the call to postpone the meeting due to the size of the crowd. Hundreds were waiting to get in and there were still not enough seats.

"They should have known there would be a large turnout for this and they should have planned accordingly," said Mary Shaver, former Haymarket employee.

"I am actually really proud of the fact that we had this many people interested to participate in an open forum," said Helen Zakos, resident.

Public hearings are normally held at the village hall, but this one was moved to the middle school to accommodate more people. The middle school is the largest public space in Itasca.

"This community is a very passionate and caring community, and they care about what happens to their community," said Itasca Mayor Jeff Pruyn. "So they jumped on board from the day it was announced."