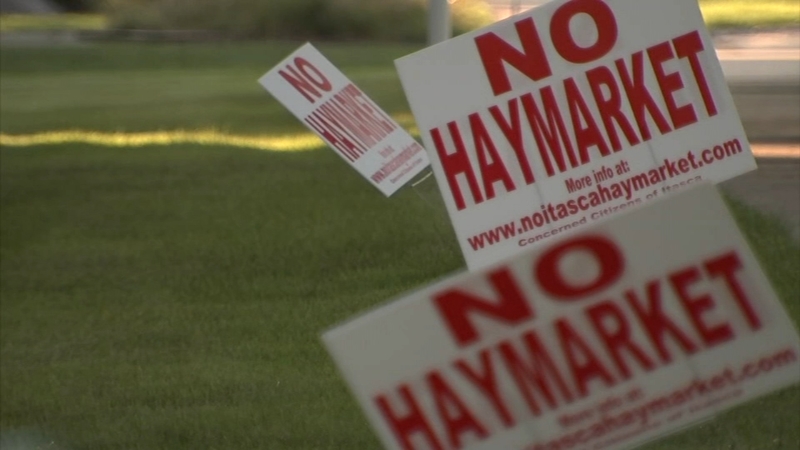 ITASCA, Ill. (WLS) -- Hundreds of Itasca residents packed a Wednesday evening meeting in Roselle about a plan to open an addiction treatment facility in the village.

The proposed Haymarket Center would convert a Holiday Inn hotel over the I-290 expressway into a 240-bed drug and alcohol treatment center, but the company faces an uphill battle as Itasca residents say: not in my backyard.

A line of hundreds filed in, armed and ready in t-shirts advocating their small town pride.

"Although we're very sympathetic to people who are struggling with drug addiction, Itasca is just far too small of a place to take on the financial burden," said resident Jessica Shannon.

A good portion of Itasca's 8,700 residents are deeply skeptical or flat-out opposed to the proposal of a nonprofit drug and alcohol rehab facility moving in.

"The town is not large enough to support this facility," said James Diestel, Concerned Citizens of Itasca. "We're the fourth-smallest town in all of DuPage. And this is one of the largest drug treatment centers."

Opposition to the center has primarily focused around two issues: a significant loss of property tax revenue for the village and a perceived strain on emergency services in a single-ambulance municipality that relies on other suburbs for resource-sharing.

But what the center does, advocates say, is fill a badly-needed void for people suffering from opioid addiction.

"There's very few programs that will take somebody regardless of their ability to pay for treatment," said Dr. Dan Lustig, president and CEO of Haymarket Centers.

"We want them to know that these are good people. They're not bad people, they just need help," said Brittany Sosa through tears. "They need someone to love them and that's what Haymarket is doing."

Lustig hoped to further dispel fears at the meeting by promising to obtain state grants to cover the lost income and use a private ambulance for the vast majority of their needs.

"If a person's condition is so severe that timing is everything, then we might [use the village ambulance]. Yes," he said. "But in our analysis we're talking maybe 40 calls a year that we would be using the village."

There is a great need for a drug and alcohol treatment center in DuPage County. According to Haymarket, in 2018 over 54,000 people there did not receive the treatment services they required. The stigma associated with addiction is partly to blame.

People in Itasca said they don't doubt the need. But it's a fight with deeply personal convictions.

"There are probably better areas to go within DuPage," Nasios said. "It's a necessary thing, but like I said, just kind of the wrong location."

"If you cannot support the people on the bottom of your community, you don't belong on the top, because communities are supposed to pick each other up and be a community" said Katie Proebstle, Haymarket supporter and recovering addict.

Itasca Mayor Jeff Pruyn said he is not yet taking a position on whether or not the center should be built there.

"The state can't guarantee us this money in perpetuity, so for us to make a decision based on getting a state grant is something we really can't use," Pruyn said. "I have to say neutral. Once all the facts are gathered I can start to decide on which way I want to go."