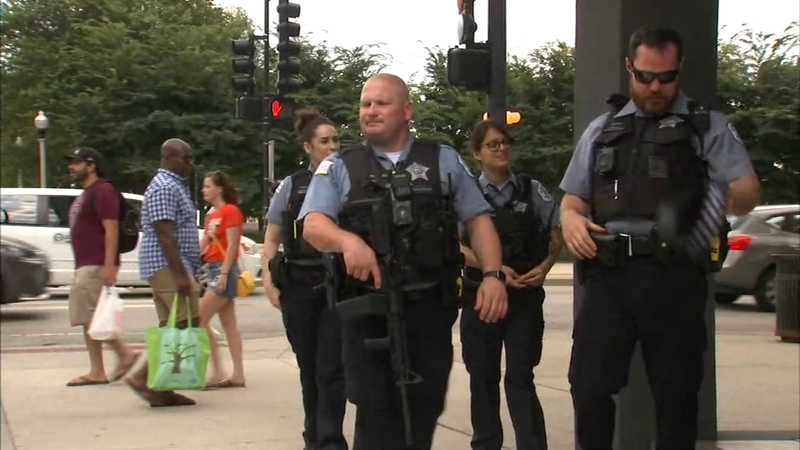 CHICAGO (WLS) -- Less than a year after the worst criminal mass shooting in U.S. history, several hotels on the perimeter of the Lollapalooza music festival have been urged by Chicago police to take special precautions the next few days, the ABC7 I-Team has learned.

Acting on information from the Las Vegas concert attack last October that left 58 people dead, Chicago police say they have schooled hotel employees and security staff on what to look out for when guests check in, including rifle cases and other containers that could hide weapons and ammunition.

Police say they will also take extraordinary counter-sniper measures beginning tonight including aiming floodlights at hotels to blind the view of any potential shooter.

After Las Vegas shooter Stephen Paddock checked in to the Mandalay Bay hotel, he methodically brought in at least ten cases of guns and ammo, sometimes with help from a bellman who let him use a service elevator. Before killing himself he fired relentlessly, 1000 rounds, from a 32nd floor window. In addition to killing 58 people attending the Route 91 Harvest music festival in a park across the famous Las Vegas Strip, he left 851 people hurt including 400 wounded by gunfire.

Security concerns at this year's Lollapalooza are especially intense because last summer, two months before the Las Vegas attack, Stephen Paddock had reserved specific rooms at Chicago's Blackstone Hotel overlooking the 2017 Lollapalooza main stage. He cancelled the reservations two days before the downtown music festival according to officials reports and investigators have never determined whether he first planned to carry out his aerial attack on the popular Chicago event.

CPD Deputy Chief Kevin Ryan tells the I-Team that for months hotel staffers have been educated on tightened security procedures to use in the ramp up to Lollapalooza, including an awareness of guest luggage that could hide weapons.

"We meet monthly with all of the hotel managers from all of the hotels downtown and we just met with them a week and a half ago and went over all of this, we went over their plans," said Ryan. "We tell them to look for certain indicators."

Chicago police tactical officers with heavy weapons on Thursday afternoon have been deployed to the lobbies of three hotels overlooking Lollapalooza, Ryan said. The ramped-up security by CPD was not evident on Wednesday when the I-Team began inspecting hotel lobbies, but by Thursday afternoon when the music started he said tactical officers were stationed at the hotels.

Police also plan to shine floodlights on the front facades of South Michigan Avenue hotels beginning this evening. Chief Ryan says the splash of bright lights will make it very difficult for any would-be sniper to see targets on the ground, and will provide officers with a better look at upper-floor windows.

Hotels in the Lollapalooza zone have also promised to inspect every occupied room at least once a day, and guests are being told at check-in to expect that. Do-not-disturb signs are to be ignored if a room hasn't been entered in 24 hours, according to police.

"We've asked the hotels to make sure they are looking at every room, every day," Deputy Chief Ryan told the I-Team in a Thursday afternoon interview against the backdrop of Lollapalooza's main stage.

"They're watching for suspicious behaviors that were pretty much made well known in news reports of what this guy (the Las Vegas shooter) was doing and how he was doing it," Ryan said.

Unlike many high-end hotels in Europe, where luggage is x-rayed at check-in before guests are allowed to their rooms, the Lollapalooza-sector hotels have not gone that far. Guests checking in to the Blackstone, Hilton and Towers, Chicago Athletic Club and Congress Plaza may come under more eyeball scrutiny, but individual bags and suitcases are not being checked. CPD Chief Ryan says that would be an individual hotel decision and that Chicago police did not recommend adding an x-ray component for hotel check-ins.

In addition to the tactical officers, Ryan says Chicago police are also deploying a sizable contingent of officers on bicycles along with covert and undercover officers to the hotel zone on South Michigan Avenue.