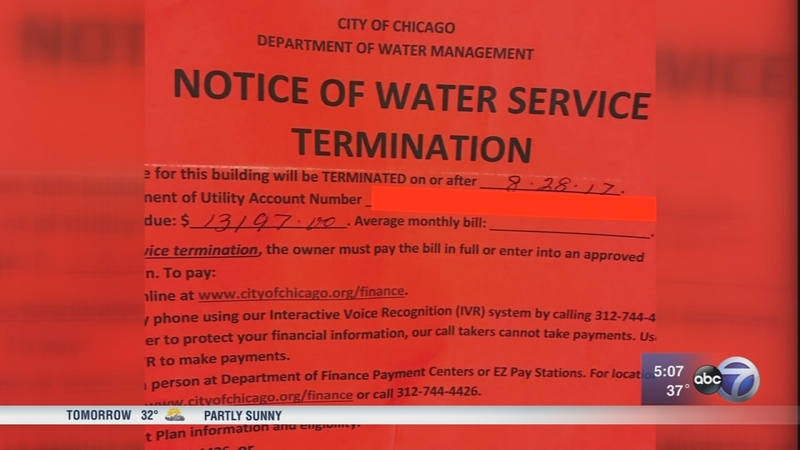 CHICAGO (WLS) -- He's a Chicago firefighter and a landlord, but his tenants were faced with the scare of a water shut-off notice. The water bill was a whopping $13,000!

Consumer Investigative Reporter Jason Knowles got results and asked how a city employee's bill, for a rental property, could get so high.

The City of Chicago's Finance Department says there was no special treatment and blames this all on what they call an error. They also say it was fixed, thanks to the I-Team investigation.

The firefighter says he's always been trying his best to make payments but that wasn't enough for some angry tenants.

"We moved them in four days. That was pretty crazy,'' explains Anita Gigliotti.

She says her college son and his roommates quickly left their rental property when they saw this water shut off notice stating more than $13,000 was owed. The landlord of the two-flat facing that big bill? Chicago Firefighter Kevin Sheehy.

Gigliotti said, "My son panicked and told me there was a poster from the City of Chicago that said that the water at this building will be completely shut off for the lack of payment of $13,197.''

The water was never shut off but Gigliotti questions how a city employee's water bill ballooned. According to city ordinance, any customer can be at risk of losing water service if they owe over $350 or are 60 days late with their payment.

We asked the Department of Finance how a city employee was able to accrue such an enormous water bill. In a statement, the department told the I-Team:

"The City of Chicago performs quarterly name-based and address-based debt checks on all city employees. When outstanding debt is identified, the city can pursue disciplinary action and/or wage garnishment."

In this case, the city says it didn't know the bill belonged to a firefighter until our inquiry. The oversight is blamed on series of misspellings of Sheehy's name - dating back to January 2008. The city says Sheehy is now up-to-date on a new, 24-month payment plan.

Sheehy declined our request for an interview but he sent this "payment history" from 2015 - and a screenshot he says shows that he started a new payment plan. The city confirms he entered into the new payment agreement in August, then he got off track and started a new plan in October.

The I-Team also found that his rental property in question was cited with 20 recent city violations, including one for not having a carbon monoxide detector and a non-working smoke detector. The firefighter blames those violations on the previous renters and sent us pictures of damage from inside the home. He says those violations are now fixed.

In a court hearing this week Sheehy was ordered to schedule an inspection. The next court date is in April.

As for his water bill, the fire department says rules dictate a three-day suspension for "indebtedness" but as long as he keeps up with his new payment plan, no discipline will be enforced.