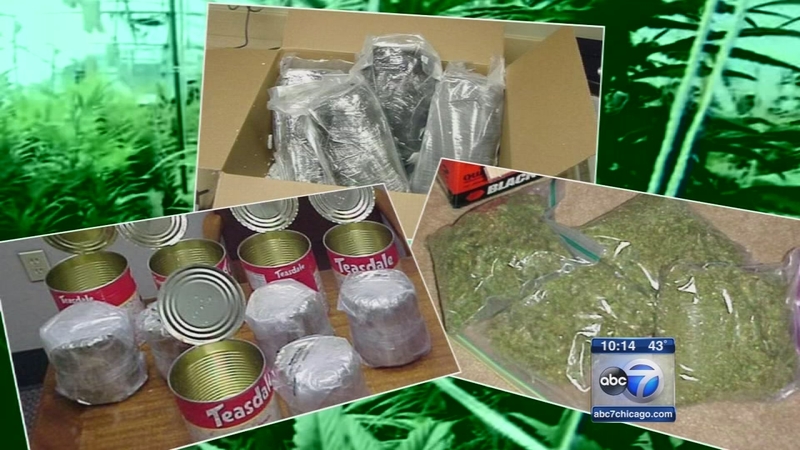 Marijuana in the mail

CHICAGO (WLS) -- Since recreational use of the marijuana became legal in several states, authorities report a major jump in the number of pot-filled packages being sent through the mail.

Mailing marijuana is a federal crime - even if it originates from a state where the drug is legal. Marijuana by mail has nothing to do with Illinois medical marijuana, which started Monday.

This is the story of illegal marijuana delivered to the doorstep, and experts said most of the marijuana stashed inside mail goes undetected.

The U.S. Postal service handles more than 155 billion pieces of mail a year and more than a billion of that in Chicago. Forty thousand pounds of pot were seized nationwide from the mail last year.

"I think we've seen it all," said Antonio Gomez, of the U.S. Postal Inspection Service in Chicago.

In some cases, pot was packaged inside cans of corn and bags were hidden inside a hand-held vacuum. Others were shipped in heat-sealed packages to disguise the smell.

"Where there's a will there's a way and regrettably the bad guys always try to be one step ahead of us but fortunately we're always two steps ahead of them," Gomez said.

"Federal law trumps state law," Gomez said. "So even with these states that have passed the legal recreational use of marijuana, it is still a violation of the federal law to transport illegal narcotics through the US mail."

Gomez would not elaborate on investigative techniques to detect marijuana --which reportedly include package profiling and drug-sniffing dogs.

"There are many methodologies that we use to attempt to rid the postal service of illegal narcotics of any kind," Gomez said.

The I-Team visited Colorado last year soon after recreational marijuana was legalized there and dispensaries were filled with candy and baked goods containing pot that experts say is more potent than in other parts of the country.

The group recently released a study that shows the amount of intercepted mail containing Colorado marijuana destined for other states has increased over 2,000 times from 2010-2014.

Gorman said the busts are a very small portion of what is actually being sent from there.

"We're only probably getting 10 percent or less, so 90 percent is going through," he said.

Authorities need a warrant der to open mail they suspect contains something illegal.

The I-Team spoke to several people who said they have sent marijuana in the mail from Colorado. They did not want to be identified, but said they have never been caught.

However, Ryan Bailey has been caught. He plead guilty in August to drug charges. Chicago police say he had a package shipped to him from Colorado containing seven pounds of marijuana. He is currently serving a three-year sentence.

"If you start with marijuana there's a higher likelihood that you might move on to other drugs," Wichern said. "But when you start making edibles and gummi bears you're targeting our youth."

"It's very, very dangerous," Gorman said. "I mean the edibles have been a tremendous negative impact."

Colorado law enforcement officials said they have their hands full with illegal marijuana farms, which are run by criminal growers who think they won't be noticed in a state where recreational weed is OK.

A new marijuana underground, shipping to Illinois and other states, and dozens of people in Colorado have been arrested in recent weeks in connection.