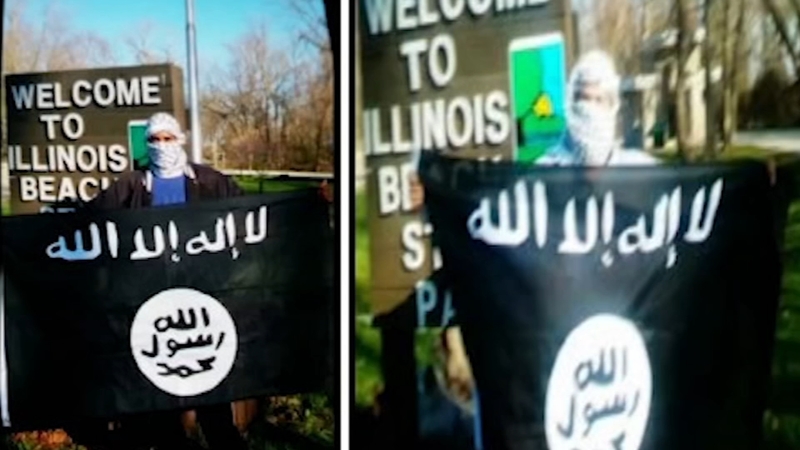 CHICAGO (WLS) -- They made no effort to hide their jihadist leaning.

Joseph D. Jones and Edward Schimenti proudly waved a terrorist flag during a photo at a Lake Michigan park in Zion, had plotted to attack the Navy's main U.S. training center near North Chicago and once had their eyes on planting an ISIS flag atop the White House.

Now Jones and Schimenti, both 37, have been found guilty of providing material support to ISIS.

The pair had been involved with a trio of federal operatives during the early stages of the investigation. Jones and Schimenti believed all three FBI associates were ISIS backers, investigators said.

They plotted to stage bomb attacks on behalf of ISIS according to authorities. The criminal complaint against the men was unusual because it included numerous photographs of the men charged. Federal prosecutors in Chicago rarely release pictures of newly-charged defendants, especially photographs that are considered potential evidence in the case.

Among the pictures in the complaint were ones taken at the Illinois Beach State Park on the Lake Michigan shoreline in Zion. They depict Jones and Schimenti holding ISIS flags. "Abdul Wali" Schimenti, is heard on FBI undercover tape saying he would like to see the ISIS flag "on top of the White House" according to investigators.

Their defense was simple: the government made them do it, entrapping the pair into terrorist activity they would never have commenced on their own.

On the day her son was arrested, Schimenti's mother Joni told the I-Team: "Eddie is no terrorist, no, he is not like that." On Thursday a Chicago federal jury found otherwise, convicting Eddie Schimenti of lying to federal agents and finding both he and his friend Joseph Jones guilty of aiding terrorists.

Jail records had Schimenti tipping the scales at 340 lbs. and investigators said prior to his arrest he had begun working out for future terrorist attacks.

During their first court appearance both suspects told the judge they were working full time. Jones claimed to work as a "clerk in the culinary department" of a cancer hospital, and Schimenti in a customer service position at a commodity company.