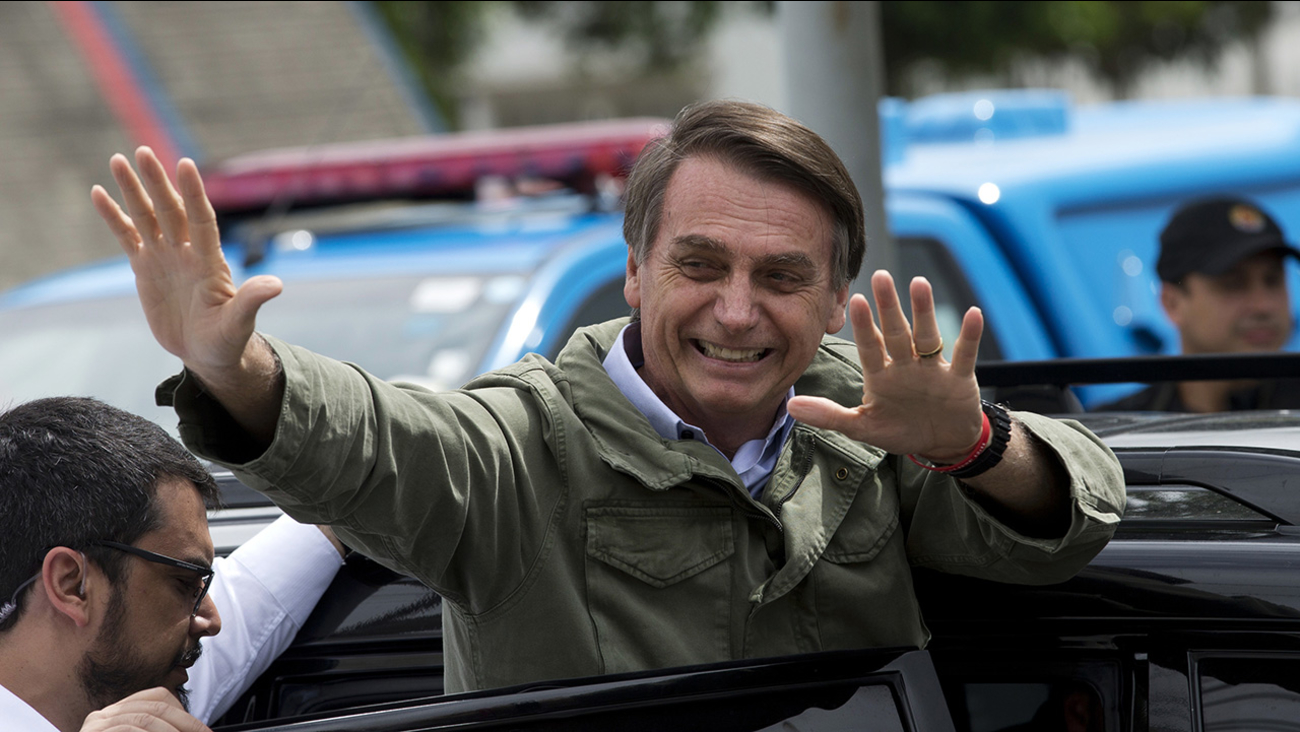 Bolsonaro was declared the winner after 94% of the votes amid one of the most polarizing and violent political campaigns in its history.

The court said it would provide more details during a press conference, which is scheduled to take place in Brasilia shortly.

Prolonged recession, rising insecurity and a massive corruption scandal that rocked political and financial institutions were among the many issues voters considered.

Bolsonaro won the first round of the elections this month amid a field of 13 candidates. But he fell short of the 50% needed to win outright and avoid a runoff against Haddad, from the Workers' Party.

"This has been an unprecedented election," said Marco Antonio Teixeira, a political science professor at the Getulio Vargas Foundation. "The rhetoric used by both candidates throughout the campaign has been extremely aggressive."

That hostility has carried over into the streets. Dozens of politically motivated acts of violence have been registered by voters, journalist and politicians.

Bolsonaro, 63, was stabbed in the stomach last month during a rally in the city of Juiz de Fora, in Minas Gerais state.

The incident took him off the campaign trail for weeks as he recovered. But it strengthened his position among Brazilians looking for a change.

Others fear the election could lead to more discrimination and hate crimes.

Bolsonaro's increased visibility prompted a social media backlash known as #elenao, or #nothim, which has gained support throughout the country and internationally.

During his Brazil tour, Pink Floyd co-founder Roger Waters exhibited the slogan on stage in neon lights and chanted "ele nao" with the crowd.

Protesters have also taken the chant to the streets during a recent "Women Against Bolsonaro march" in Sao Paulo.

"Bolsonaro has opened a Pandora box," protest organizer Luka Franca said. "He's given a voice to an ultra right population who want to voice their prejudice and annihilate anyone who is different."

Bolsonaro, who has been compared to US President Donald Trump and Philippines President Rodrigo Duterte, has stirred controversy by making misogynistic, racist and homophobic remarks.

He once told a congresswoman that she did not deserve to be raped because she was "very ugly," Brazil's TV Globo reported.

He also said publicly he'd prefer to see his son "die in an accident" than a member of his family be homosexual.

"This negative discourse he's spreading is killing people," Felipe Lago, a 29-year-old fashion producer told CNN. "If he wins, who knows what will happen to us?"

Lago created an Instagram account called "elenaovaoinosmatar," or "he won't kill us" in English, shortly after being verbally assaulted and threatened by a group of Bolsonaro supporters for being gay.

"Although I was scared, I decided to post what happened to me on Facebook," Lago said. "I got a lot of responses from friends and others saying the same thing happened to them."

His Instagram account has more than 100,000 followers and includes videos of others who say they experienced similar assaults.

In their final days on the campaign trail, both Bolsonaro and Haddad asked their supporters not to engage in violence.

Laura Chinchilla, the head of the Organization of American States mission of observers for the Sunday election, said she worries about a fake news "phenomenon" seen throughout the campaign.

"The phenomenon we see in Brazil may be the first of its kind, essentially because it's different from other electoral campaigns in other countries," Chinchilla told local media Thursday in Sao Paulo.

Whatsapp shut down a number of accounts following an investigation by Brazilian daily Folha de Sao Paulo that found companies were buying mass text messaging packages to blast users with negative campaign ads on their phones.

The tactic is considered illegal campaign financing, according to the Folha de Sao Paulo investigation.

Facebook also shut down several groups and user accounts in Brazil this week after identifying them as "fake accounts," according to a statement by the social media company.

"Authenticity is a core value at Facebook. It's why we ask that people use their real name and why we prohibit fake accounts and other tactics bad actors use to misrepresent their identity," the statement said.

"Today, as part of our ongoing efforts to protect our community from this type of abuse, Facebook removed 68 Pages and 43 accounts associated with a Brazilian marketing group, Raposo Fernandes Associados (RFA), for violating our misrepresentation and spam policies."

Bolsonaro's supporters believe the Whatsapp and Facebook scandals were created by Haddad's Workers' Party (PT) as a distraction because they are trailing in the polls. They have also accused Folha de Sao Paulo of being biased and issued threats against journalists involved in the investigation.

"There is no proof whatsoever," Fabio Silveira, an engineer, said during a recent pro-Bolsonaro event. "This is one of the PT's strategies. They've reached a point where they realize they can't win and are now trying to destroy the image of the opposition candidate with false stories."

Keeping out the Workers' Party

For some Brazilians, like teacher Alexandre Vastella, voting for Bolsonaro is more about keeping the Workers' Party (PT) out of office.

"I want Bolsonaro to be President, not because he's the ideal person, but because we can't risk letting the PT back in power," Vastella told CNN. "Sure, all of the major parties are corrupt but the PT created an infrastructure of corruption."

Lula, as he is popularly known, left office with a 83% approval rating, after his policies helped lift millions of Brazilians out of poverty.

Many politicians, including Lula, were caught in a wide-ranging, 4-year anti-graft probe known as "Operation Car Wash." He was arrested in April and given a 12-year sentence for corruption and money laundering.

Despite the arrest, Lula was running for a third term and leading in the polls until he was barred from running by the country's top electoral court in September. His running mate, Haddad, replaced him on the ballot and became his party's default candidate.

Voting is compulsory in Brazil, which means everyone must submit a ballot on Election Day. Some undecided voters, like Sao Paulo resident Mauricio Soares, are choosing to vote null or blank.

"The decision of voting null came after a lot of thought and I am firm in my decision," Soares told CNN. "I am not neutral. I am positioning myself against both candidates."

Teixeira, the professor, said the winner must bridge the divide caused by the campaign.