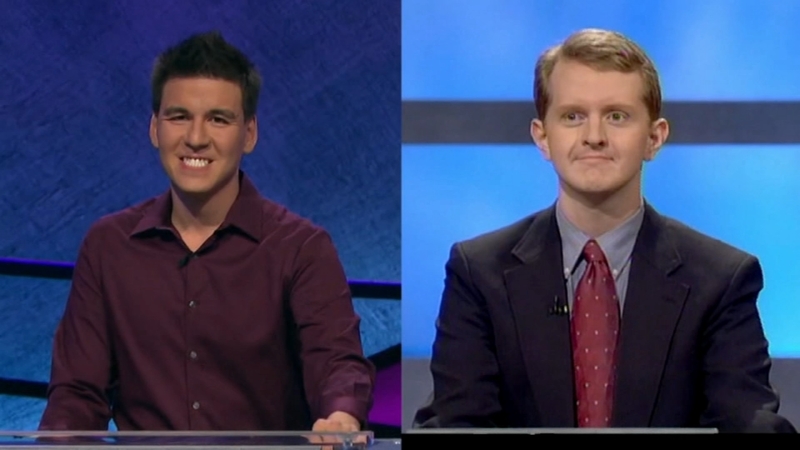 What does Ken Jennings think of James Holzhauer?

Holzhauer, a 34-year-old professional sports better who lives in Las Vegas and is originally from Naperville, is on a roll.

But what does Jennings think of Holzhauer as he nips at the heels of his record? He sat down with his first live interview with Good Morning America Tuesday.

"I'm really excited. For 15 years I thought someone was gonna make a run at this record," Jennings said. "I was there, I saw it happen. I know it was possible. What I didn't expect is that someone could make a run at the cash record in, like, a third of the time. It's really just astounding what he's doing."

Jennings admitted there was one thing about Holzhauer's run that's bugging him.

And what about facing off against Holzhauer?

"You know, the thing is it's been 15 years for me," he said. "You know, we'll never know how Babe Ruth and Hank Aaron would have played at the same time because they were decades apart. Can I have my 2004 brain back if I play this guy? But I think I could hold my own against him, even today, but I would need some breaks."
Report a correction or typo
Related topics:
arts & entertainmenttelevisiongame showjeopardy
Copyright © 2022 WLS-TV. All Rights Reserved.
JEOPARDY
'Jeopardy!' champ Amy Schneider reflects on White House visit
'Jeopardy!' contestant removes wig to destigmatize cancer recovery
Mayim Bialik hosts the 'Jeopardy! National College Championship'
Naperville native competing on 'Jeopardy!' college championship
TOP STORIES
Security guard shoots man in buttocks at Millennium Park
9 shot, 2 fatally, on Near North Side
Chicago mass shooting victim ID'd as father of 2, with twins on way
New hotline aims to help those struggling with opioid, substance abuse
Officer relieved of powers after teen carjacking suspect shot: CPD
United cancels couple's flight, charges $4K more for same seats
Teen charged with killing man after kicking him in head in CTA attack
Show More
Great Lakes Piping Plover chick Imani spotted in Minnesota
Doja Cat drops out of Lollapalooza due to throat trouble
Legendary Cubs pitcher 'Fergie' Jenkins immortalized with statue
American Idol finalist Leah Marlene prepares for finale
Bakery works to help others as it serves up sweet treats
More TOP STORIES News