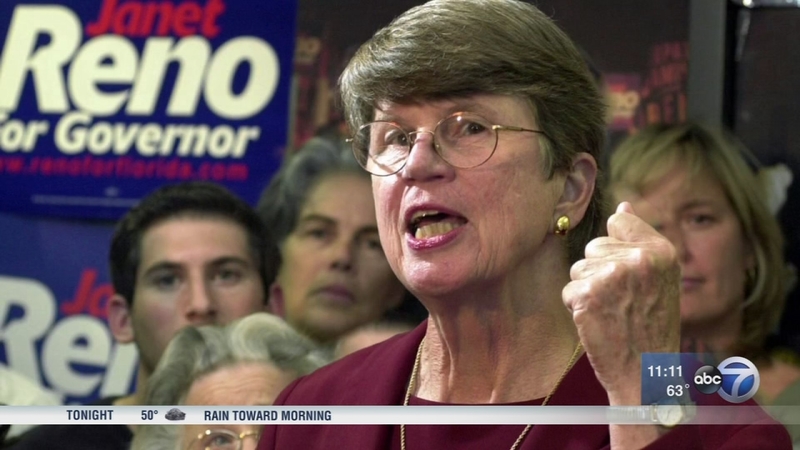 MIAMI -- Shy and admittedly awkward, Janet Reno became a blunt prosecutor and the first woman to serve as U.S. attorney general and was also the epicenter of a relentless series of political storms, from the deadly raid on the Branch Davidian compound at Waco, Texas, to the seizure of 5-year-old Cuban immigrant Elian Gonzalez.

Chicago Mayor Ram Emanuel said in a statement Monday that he was proud to serve with Reno.

"Janet Reno was a trailblazer who helped shatter Washington's glass ceiling as the first female United States Attorney General. She was a person of integrity, intelligence, and independence. She was a committed public servant with a passion for justice. I was proud to serve with her, proud to partner with her on the assault weapons ban and to put more officers on our streets, and proud to call her a friend. The thoughts of Amy and me are with the Reno family and Janet's many friends and admirers around the world."

Former President Bill Clinton said in a statement Monday that he will always be grateful for her counsel:

"Hillary and I are deeply saddened by the passing of Janet Reno, an extraordinary public servant who dedicated her life to advancing justice, equality, and innovations in criminal justice that would save and lift lives. As Attorney General for all eight years of my Presidency, Janet worked tirelessly to make our communities safer, protect the vulnerable, and to strike the right balance between seeking justice and avoiding abuse of power. From her work as a prosecutor in Florida pioneering "drug courts" that gave first-time offenders the chance to avoid jail time, to her leadership enforcing the Violence Against Women Act and Brady Bill as Attorney General, she never forgot that policy matters and makes a difference in the lives of real people. It's fitting that she spent her last years with family and friends, living in the house her mother built with her own hands. Janet was her mother's daughter. I will always be grateful for her service, counsel, and friendship."


Reno, a former Miami prosecutor who famously told reporters "I don't do spin," served nearly eight years as attorney general under President Bill Clinton, the longest stint in a century.

Her sister, Maggy Reno Hurchalla, told The Associated Press that Clinton called over the weekend said to "tell Janet I love her" and that many others from her career visited or called, including former Florida governor and Sen. Bob Graham.

"When I tucked her in at night, I said 'I love you,'" Hurchalla said. "She looked like she was asleep and raised one eyebrow and said, 'I love you too very much.' She was surrounded this weekend by people who love her."

One of the Clinton administration's most recognizable and polarizing figures, Reno faced criticism early in her tenure for the deadly raid on the Branch Davidian compound at Waco, Texas, where sect leader David Koresh and some 80 followers perished.

She was known for deliberating slowly, publicly and in a typically blunt manner. Reno frequently told the public "the buck stops with me," borrowing the mantra from President Harry S. Truman.

After Waco, Reno figured into some of the controversies and scandals that marked the Clinton administration, including Whitewater, Filegate, bungling at the FBI laboratory, Monica Lewinsky, alleged Chinese nuclear spying and questionable campaign financing in the 1996 Clinton-Gore re-election.

In the spring of 2000, Reno enraged her hometown's Cuban-American community when she authorized the armed seizure of young Elian. The boy was taken from the Little Havana home of his Miami relatives so he could be returned to his father in Cuba.

During her tenure, the Justice Department prosecuted the 1995 Oklahoma City bombing case, captured the "Unabomber" Theodore Kaczynski that same year and investigated the 1993 terrorist attack on New York's World Trade Center. The department also filed a major antitrust lawsuit against Microsoft Corp. and Reno was a strong advocate for protecting abortion clinics from violence.

Attorney General Loretta Lynch praised Reno's integrity and status as a female trailblazer, calling Reno in a statement "one of the most effective, decisive and well-respected leaders" in Justice Department history.

Reno, added Lynch, approached challenges "guided by one simple test: to do what the law and the facts required. She accepted the results of that test regardless of which way the political winds were blowing."

Miami U.S. Attorney Wifredo Ferrer, who worked for Reno in Washington from 1995-2000, recalled her compassion for the nation's dispossessed, her warm relationship with employees and her practical approach to problems.

"Even if you agreed or disagreed with her, you knew she was coming from a place of integrity," Ferrer said in an interview. ""Through her work, through her decisions, she exhibited a lot of strength and a lot of courage. And that is also inspiring."

After leaving Washington, Reno returned to Florida to run for governor in 2002 but lost in a Democratic primary marred by voting problems.

The campaign ended a public career that started amid humble beginnings. Born July 21, 1938, Janet Wood Reno was the daughter of two newspaper reporters and the eldest of four siblings. She grew up on the edge of the Everglades in a cypress and brick homestead built by her mother and returned there after leaving Washington. Her late brother Robert Reno was a longtime columnist for Newsday on Long Island.

After graduating from Cornell University with a degree in chemistry, Reno became one of 16 women in Harvard Law School's Class of 1963. Reno, who stood over 6 feet tall, later said she wanted to become a lawyer "because I didn't want people to tell me what to do."

In 1993, Clinton tapped her to become the first woman to lead the Justice Department after his first two choices - also women - were withdrawn because both had hired illegal immigrants as nannies. Reno was 54.

"It's an extraordinary experience, and I hope I do the women of America proud," Reno said after she won confirmation.

Clinton said the vote might be "the only vote I carry 98-0 this year."

A little more than a month after taking office, however, Reno became embroiled in controversy with the raid on the Branch Davidian compound near Waco.

The standoff had started even before Reno was confirmed as attorney general. On Feb. 28, 1993, agents from the U.S. Bureau of Alcohol, Tobacco and Firearms made a surprise raid on the compound, trying to execute a search warrant. But during the raid gunfire erupted, killing four agents and six members of the religious sect.

That led to a 51-day standoff, ending April 19, 1993, when the complex caught fire and burned to the ground. The government claimed the Davidians committed suicide, shooting themselves and setting the fire. Survivors said the blaze was started by tear gas rounds fired into the compound by government tanks, and that agents shot at some who tried to flee. Reno had authorized the use of the tear gas to end the standoff and later called the day the worst of her life.

"It was a dangerous situation," Reno said of the incident during a 2005 lecture at Duke University. "The tragedy is that we will never know what was the right thing to do."

Things got no easier after Waco. In 1995 Reno was diagnosed with Parkinson's after noticing a trembling in her left hand. She said from the beginning that the diagnosis, which she announced during a weekly news conference, would not impair her job performance. And critics - both Republicans and Democrats - did not give her a pass because of it.

Republicans argued she should have sought appointment of an independent counsel to investigate allegations of Clinton-Gore fundraising violations. Democrats, meanwhile, grumbled that she failed to act as a team player.

In early 2000, Reno tried to negotiate the return to Cuba of young Elian, who had been rescued after his mother and others had drowned trying to boat from Cuba to Florida. He had been placed in the care of a Miami uncle, but his father, who lived in Cuba, wanted him returned to the island.

When Reno decided talks had broken down that April, she ordered an early morning raid by federal agents who seized the boy, provoking the ire of Miami's Cuban-American community. Reno insisted that Elian should be with his father - she even kept a snapshot of a smiling Elian in his father's arms near her home computer.

Reno said later that federal officials tried up until the last minute to negotiate a voluntary handover and avoid the raid - where Elian was found hiding in a closet and confronted by an agent with a gun.

"We have been to great lengths to resolve this case in the least disruptive manner possible," she said at a news conference following the raid.

As attorney general, Reno often was teased by late night talk show hosts for her unassuming appearance and no-nonsense attitude. Comedian Will Ferrell memorialized her in a recurring "Saturday Night Live" skit called "Janet Reno's Dance Party" and Reno visited the skit the night she left the Justice Department in January 2001.

Reno began her career in Miami in the mid-1960s and had her first encounter with the "glass ceiling," getting passed over for a job at a law firm because she was a woman. She later made partner. In 1972, she lost a race for a Miami-area legislative seat but learned the importance of sticking to her principles from mentor John Orr, a former state lawmaker.

"Don't equivocate, don't pussyfoot, don't talk out of both sides of your mouth and you'll wake up the next morning feeling good about yourself," he told Reno. It became one of her favorite sayings.

After losing that election, Reno was hired by the Dade State Attorney's office, where she established herself as an organized and competent lawyer. In 1978, when State Attorney Richard Gerstein decided to step down, Reno was named his successor.

It included the line: "All the money you get, all the checks you make; Janet Reno will make sure and take."

She also weathered a 1980 riot after an all-white jury acquitted five police officers for the beating death of a black insurance salesman. Eighteen people were killed in the rioting and crowds chanted Reno's name, accusing her of being a racist and demanding her resignation. Reno refused.

"To resign was to give into anarchy," she said.

Her last foray into politics was the race for Florida governor. Known for being down-to-earth - her home number was listed in a city directory both before and after Washington - and even folksy, she crisscrossed the state to campaign in a red Ford Ranger pickup truck. But Reno lost the primary to Tampa lawyer Bill McBride despite her name recognition. Republican Gov. Jeb Bush defeated McBride to win a second term.

Former Attorney General Eric Holder, who also worked for Reno at main Justice in the 1990s, marveled at the twists and turns in her journey.

"Hers was a great and uniquely American life and was well lived," Holder said in a statement. "All who truly knew Janet loved her and all in this nation were made better by her service and by her sacrifice. I will miss her."

After retiring from politics she served on the boards or as an adviser to several organizations. In 2004 she joined the board of the New York-based Innocence Project, which works to free prisoners who can be proven innocent through DNA testing.

She also spent more time with her family. Reno never married but remained extremely close to her tight-knit family.

Asked to describe her legacy after ending her gubernatorial campaign, Reno quoted George Washington: "If I were to write all that down I might be reduced to tears. I would prefer to drift on down the stream of life and let history make the judgment."