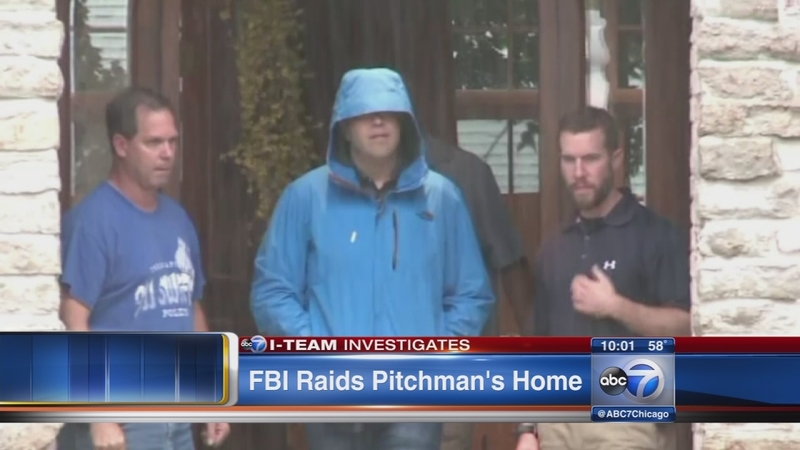 ZIONSVILLE, Ind. (WLS) -- The FBI raided the Indiana home of Subway celebrity pitchman Jared Fogle on Tuesday. Known as "the Subway guy", the sandwich chain announced its relationship with Fogle has been suspended.

At 6 a.m. Tuesday, federal and local authorities descended on Fogle's home in Zionsville, a suburb of Indianapolis, as part of what law enforcement sources say is an ongoing child pornography investigation.

Fogle was seen inside a law enforcement evidence trailer for a time, then pacing on his driveway as authorities removed computers and other potential evidence. His attorney, Ron Elberger, offered a few hopeful words.

"Ultimately my story with Subway starts in Chicago," Jared Fogle said a year ago on Windy City Live as he recalled how his Subway weight loss commercial was tested in Chicago.

On Tuesday afternoon, Subway announced that the sandwich maker and Fogle have mutually agreed to suspend their relationship due to the current investigation.

Subway & Jared Fogle have agreed to suspend their relationship due to the current investigation. Jared is cooperating with authorities.

This search is said to be an off-shoot of the arrest of Russell Taylor, the former executive director of The Jared Foundation, Fogle's organization that aims to combat childhood obesity. In May 2015, Taylor was arrested in Indianapolis on federal child pornography charges.

According to a federal complaint, Taylor texted a friend with a message containing child pornography. The friend then contacted federal police, who say they found evidence of nude children taped inside Taylor's home. Four child victims have been identified, three of which lived with Taylor periodically. Taylor tried to commit suicide two days after being arrested.

Law enforcement officials briefed on Tuesday's search of Fogle's home declined to say whether Fogle is the target of this investigation or whether his home may have housed equipment useful in their investigation of Taylor.

Fogle's attorney said his client is cooperating, has not been charged or arrested and that authorities have not disclosed what they are looking for. Fogle was present for a period of time during the search, but then left with an attorney. The attorney returned twice to retrieve items from the home and declined to comment further on the raid.

"He was a private neighbor for the most part," says Jacob Schrader. "We didn't see him outside too much. Mostly his family and his wife and stuff like that. Never thought anything too strange about it, we just thought he liked to remain private. So it's really weird seeing it going on, you just wouldn't expect it from a family like that."