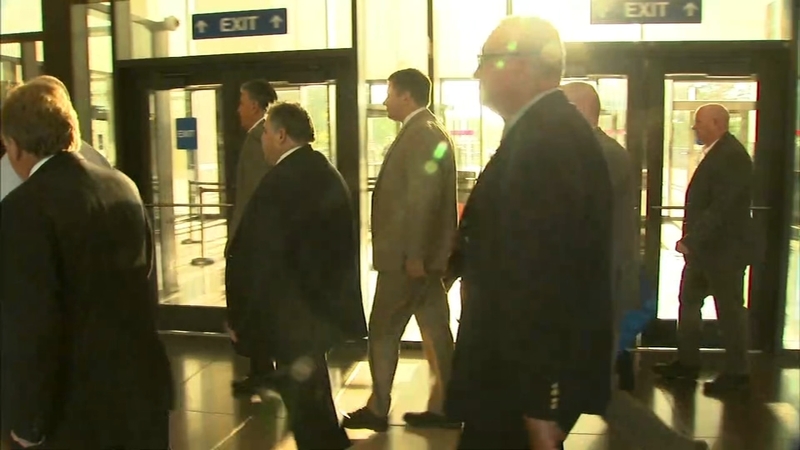 Hundreds of people gathered in protest outside the Leighton Criminal Courthouse demanding justice for Laquan McDonald.

Toya Woodland came to Chicago all the way from Minneapolis.

"In my heart of hearts, I'm hoping that justice prevails this time, that a jury of his peers will see that that young man was murdered in cold blood," Woodland said.

Jason Van Dyke walked into court, surrounded by at least a dozen deputies, officers, supporters and the Fraternal Order of Police President Kevin Graham as his trial begins.

Jamie Kalven is one of the journalists who forced the video of the shooting of McDonald to become public.

"I could never have imagined all that has flowed from this single incident from the death of this child, has had cataclysmic impact on the city of Chicago," Kalven said.

Matt Topic of the Better Government Association was one of the civil rights lawyers who fought for the release of the video showing the shooting of Laquan McDonald.

Van Dyke is accused of murdering 17-year-old Laquan McDonald who had a knife back in 2014. Dash camera video shows the officer firing 16 shots as McDonald appears to be walking away.

McDonald's family arrived in a large group to watch the court proceedings. A wave of observers are also promising to monitor the trial every day.

"The turnout is gonna get greater as this goes on, plus we got people demonstrating in solidarity in 13 different cities," said community activist Frank Chapman.

"We have a systemic problem where we have policing in the whole country where there's no accountability at any level,"

The process to find 12 impartial jurors began Wednesday morning. In court, the judge read all 23 counts against Van Dyke and gave preliminary instructions to the prospective jurors, who were sworn in and led back to the Jury Commissioner's Office to fill out jury questionnaires.

The pool of potential jurors is expected to be about 200.

Protesters believe this case highlights a problem not isolated to Chicago.

"We have a systemic problem where we have policing in the whole country where there's no accountability at any level," said protester Jess Sundin.

Tuesday, relatives for McDonald called for peace. They don't want to see any violence before, during or after the trial.

Meanwhile, it's still unclear if this will turn out to be a bench trial or a jury trial.