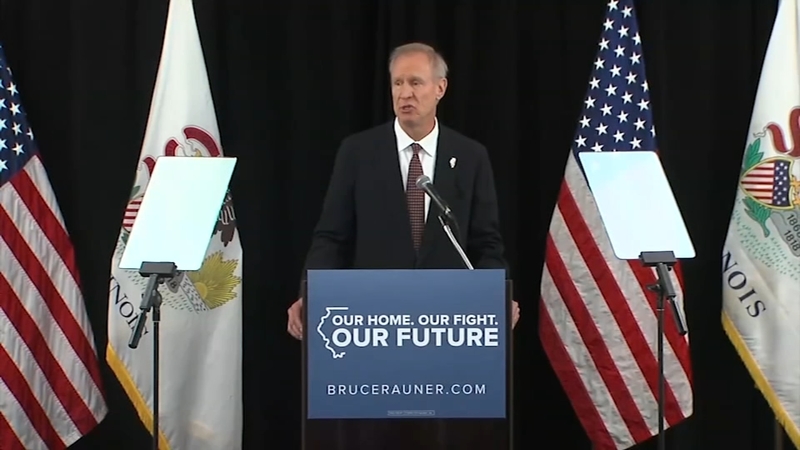 CHICAGO (WLS) -- As striking Hilton hotel workers made noise Thursday, Governor Bruce Rauner made his own noise with a 25-minute campaign speech that was part mea culpa, part lambast of JB Pritzker.

Rauner told a closed room of supporters and invited guests that he underestimated how difficult change can be in government.

"I have learned that the two most important things for success in public service are courage and understanding," Rauner said.

As Pritzker blamed Rauner for the two-year-long budget impasse, Rauner admitted his fight for reform cost him politically.

"It takes courage to stand up to the special interests and the status quo," Rauner said. "But, I've learned that is equally important to build mutual understanding and find common ground with elected officials."

Pritzker called Rauner's speech an attempt to reframe his campaign that came "too little, too late."

"He obviously knows that people know he is a failure for the past 4 years, so he's got to try anything he can grab on to convince them otherwise," Pritzker said.

Pritzker's character was the target for the last half of Rauner's speech, as he accused the Democrat of having off shore bank accounts and avoiding property taxes.

"His behavior shows him to be a person utterly lacking in the integrity and character we need in public office," Rauner said.

"Well, Bruce Rauner has no character when he doesn't get a budget passed and cost working families jobs," Pritzker said.

While Governor Rauner has spent the past 4 years blaming Illinois House Speaker Michael Madigan for the state's financial problems, Rauner only mentioned Madigan once in his speech.

The governor did not take reporters' questions after his speech.

A poll conducted by Research America on behalf of the Illinois Broadcasters Association found that Illinois voters currently favor Pritzker.

The poll that found that out of the 1,000 voters polled, 44 percent would vote for Pritzker if the election were held today.

27.1 percent said they would vote for Rauner. Conservative Party candidate Sam McCann had the support of 6.4 percent of polled voters, and Libertarian Kash Jackson had 4.3 percent.