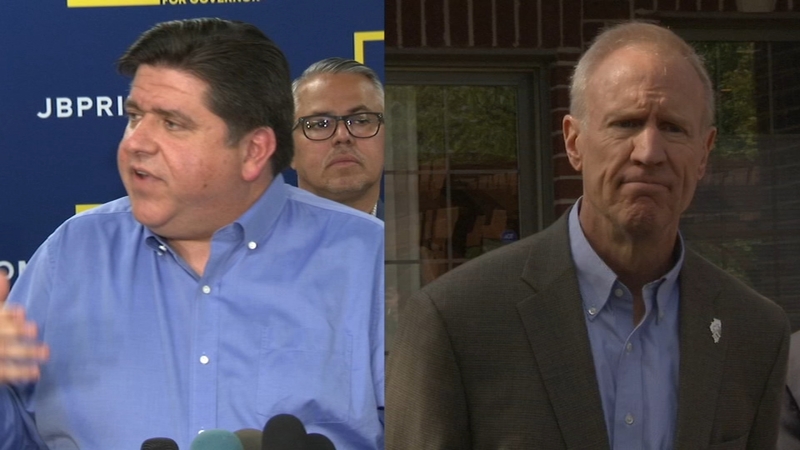 Pritzker, Rauner accuse one another of criminal behavior

Governor Bruce Rauner and challenger JB Pritzker continued to exchange blows Thursday, one day after their debate on ABC7 Wednesday night. Each accused the other of engaging in criminal behavior in a day of dueling press conferences.

Pritzker said the way the governor handled the situation at the veterans' home in Quincy is criminal. Rauner said Pritzker ought to be charged with a crime for property tax fraud, in two lines of attack that are likely to continue for many days to come.

"Bruce Rauner managed his public image instead of managing a health crisis. This governor cared more about headlines than about our heroes," Pritzker said.

He continued to beat the drum over the Quincy veterans' deaths, which started in 2015, with new ammunition from Attorney General Lisa Madigan who suddenly announced yesterday she was investigating the Rauner administration's handling of the situation.

"This was all partisan, this is about Attorney General Madigan wanting to throw mud in the air quickly," said Rauner.

Pritzker found himself under further fire over "Toiletgate" which the Cook County Inspector General called a scheme to defraud taxpayers.

"Ladies and gentlemen, that's criminal behavior. Now who is the victim? Who is the victim, the victims are the citizens to Cook County. The residential property tax payer," said Sean Morrison, Cook County Commissioner, standing with the governor at a news conference in Des Plaines.

Pritzker continued to defend what he did to his Gold Coast home as following all the rules. When asked why a billionaire needs to rip out toilets to save $330,000, he responded:

"Well that was not obviously what happened, we renovated our home, we stopped that renovation, we restarted it, we paid the taxes that were assessed on that property," Pritzker said.

As Rauner finds himself under investigation for Quincy, He offered this explanation for how his administration publicly responded to the legionnaire's crisis.

"Well you know nobody's perfect, nobody is, nobody on our team is ever perfect, we're all human beings, everybody that I'm aware of has done what they thought was best and acted promptly," Rauner said.