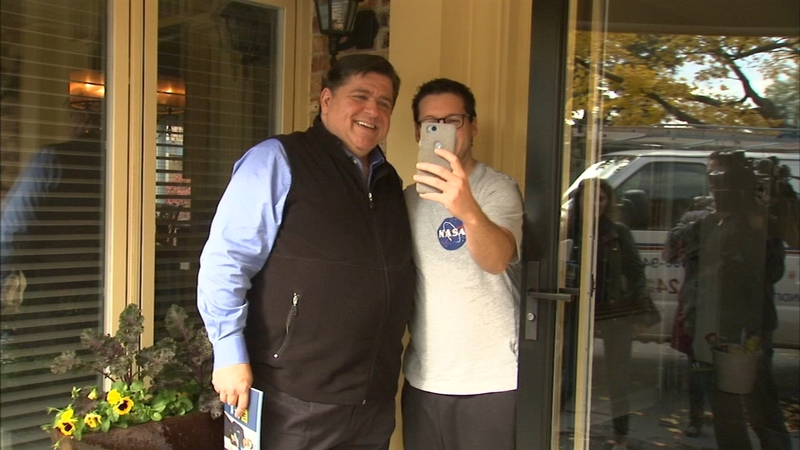 CHICAGO (WLS) -- Democrat J.B. Pritzker is heading into the home stretch of the Illinois governor election with the polls and money on his side and, with eight days until the election, a lot of optimism.

"Democrats up and down the ticket, that's what I'm trying to do," he said. "Campaign's going great, I've been knocking on doors all weekend, and, really, every single day."

If Pritzker believes he's knocking on the door to victory next Tuesday, he's not taking any chances these last eight days.

Dogged by a last minute discrimination lawsuit by some campaign staffers and Bruce Rauner's campaign message that a vote for Pritzker is a vote for higher taxes, the billionaire Democrat is forging ahead undeterred.

"Bruce Rauner is desperate at this point, and so he's just throwing falsehoods at me and anybody that stood against him, and I frankly think none of that is landing with anybody," Pritzker said.

"Look, we've got to raise people's standards of living in Illinois, that is just the most important thing that we can do, and so that's with this campaign is really focused on," he added.

Pritzker, who is Jewish, reflected Monday on Saturday's synagogue massacre in Pittsburgh.

"It's the worst attack against Jews in the United States in memory, and, frankly, I know people who have lived in Squirrel Hill where that attack took place," he said. "And these kinds of attacks, unfortunately, throughout history we've seen this, and it's been a precursor to worse things."

"I knew this would be a tough race over all, and I've been ready for it, and I worked hard, and I think people are excited about the change that we can bring to the state," Pritzker said.

ABC7 asked if Pritzker wins the governorship, and in three years Illinois is not better off, will he pledge not to run again>

"Well, you want a governor who's fighting for working families and I certainly believe that my policies are going to help people in Illinois," he answered.