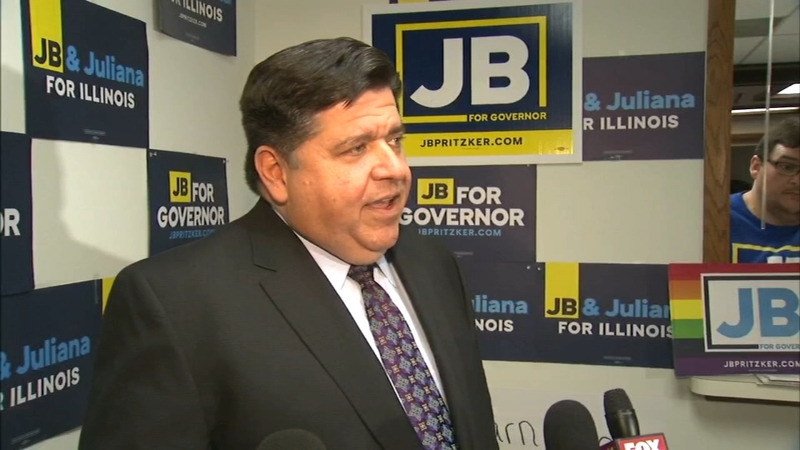 CHICAGO (WLS) -- In the race for governor, J.B. Pritzker's campaign is being sued by 10 staff members for racial discrimination and harassment.

They claim they were hired to fill a race quota and to do specific race-related duties. They also say white staff members were treated better.

Pritzker denied the allegations at a campaign event in Joliet.

"I know that the African-American community knows who I am, knows that I will fight for them when I'm governor," he said.

J.B. Pritzker responded to a federal lawsuit filed against his campaign alleging racial discrimnation at an event in Joliet Wednesday evening.

In the federal lawsuit, eight current and two former employees complained that "...the JB Pritzker for Governor campaign has been a cesspool of racial discrimination and harassment." They allege the vast majority of black and Hispanic employees were "...herded into race-specific positions...offered no meaningful chance for advancement, and receive less favorable treatment than their white counterparts."

"I think the policies and practices that were put forth during the campaign have racial undertones and that my clients have been discriminated upon based on those policies," said attorney Shay Allen.

Yet in a tweet posted by one of the workers in the lawsuit, Celia Colon wrote, "Had an amazing event tonight," seeming to refer to an event the same day the lawsuit was filed.

When asked why eight of the plaintiffs are still working for their campaign, Allen said "even though the situation is horrible, they're powering through it" so they can finish what they started.

In the race for governor, J.B. Pritzker's campaign is being sued by 10 staff members for racial discrimination and harassment.

Pritzker and his running mate Juliana Stratton denied the allegations, and Stratton referred to a letter sent by the plaintiff's attorney in which the plaintiffs demanded a $7.5 million settlement in a 24-hour window, suggesting the whole thing is akin to an extortion attempt.

"When people feel like they have been harassed or discriminated against, they have the right to come forward and have their voices heard. In this case, we had a letter delivered to us asking for $7.5 million dollars in 24 hours or they threatened legal action and to go to press. That's not a good faith effort," Stratton said in a statement.

The Pritzker campaign released a copy of what they said was a demand letter sent by the attorney representing the campaign workers. The letter demanded compensation of $7.5 million and personalized letters of recommendation.

The ⁦@JBPritzker⁩ campaign releases a copy of the demand letter sent by the attorney representing the campaign workers who alleged the Pritzker campaign was a “cesspool of racial discrimination and harassment.” pic.twitter.com/k7pfQ0cZYW

In a statement, Pritzker said, "To be clear, this is just not true. I am incredibly proud of our campaign, how diverse it is, and how inclusive our administration will be."

The incidents listed in this complaint are baseless and make offensive claims in regard to several members of our staff. We stand by our staff and that's why we are not afraid to litigate this to the fullest extent of the law. I couldn't be prouder to be on the ticket with JB and of the statewide, grassroots campaign we've built."

But former campaign worker Kina Collins, who quit nine months ago after Pritzker was caught on FBI wiretaps making disparaging remarks about African American elected officials, said she can corroborate the allegations.

"Yes, there were racial slurs, there were sexist jokes that were made and it was rampant and unfortunately it went unchecked," Collins said.

"When charges come out late in the game like this, they can get a lot of attention and have a lot of impact. We'll have to see about this one," said ABC7 Legal Analyst Laura Washington.

Governor Bruce Rauner said this seems to show a pattern in Pritzker's campaign.

"I think it's troubling, these allegations are serious, they need to be investigated and I think the people of Illinois deserve to know the truth about Mr. Pritzker's actions," Rauner said.

Rauner also denied his campaign had anything to do with the lawsuit, calling any suggestion of that "ridiculous."