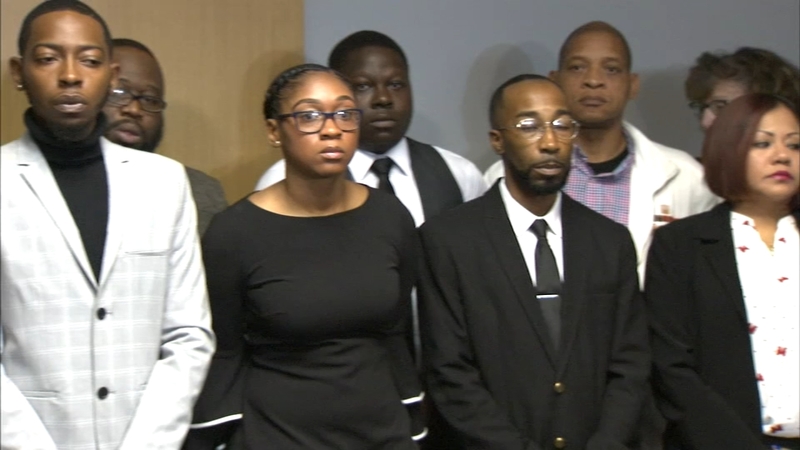 CHICAGO (WLS) -- The campaign workers who are suing Democratic candidate for governor J.B. Pritzker for racial discrimination came forward Monday in a show of solidarity.

They said they're fighting for their rights and dignity and claimed their lawsuit has nothing to do with politics.

Pritzker has repeatedly denied the claims, which first surfaced after the suit was filed six days ago. His running mate Julianna Stratton suggested it was an 11th hour shakedown, which was part of the reason the workers stepped forward and put their faces to the lawsuit.

Seven current and two former campaign workers stood together Monday morning to defend their lawsuit and decry what they called a toxic environment of racial harassment and discrimination.
They said they filed formal complaints and reported their concerns verbally to supervisors.

"However, we were ignored, silenced, intimidated and forced to endure their abuse of power," said Maxwell Little, Pritzker field organizer.

"We are not going to give specifics, we do that in court. That's what court is for, we're here today because we're answering questions and other matters that have been brought up to smear these people's reputation, their character, their dignity," said Shay Allen, attorney for plaintiffs.

The plaintiffs, who sought a quick settlement of $7.5 million, said when they were indirectly accused of extortion they had to speak up.

"And at the end of the day this is about holding our leaders accountable, and this is about justice, which has no price tag," said Celia Colon, Pritzker campaign worker. "I don't have to be mistreated or abused by anyone. And I will not allow this, this fight is bigger than me."

Pritzker denies the allegations and his attorney sent a letter to the plaintiff's lawyers accusing them of trying the case in the media while not even serving Pritzker's campaign with the lawsuit.

"...the litigation privilege does not extend to efforts to smear the Campaign and its staff in the press. Simply put, be advised that our client has authorized us to pursue all legal remedies to defend itself against false and defamatory statements," Pritzker's attorney said in the letter.

"The tension in this case seems to arise from the fact our truth is inconvenient," said Jeannette Samuels, attorney for plaintiffs.

One former campaign worker said she personally talked to Pritzker about discrimination in the campaign after the Blagojevich tapes came out.

"He promised me to address it, and I was laid off," Kayla Hogan said.

"We intend to fight for our justice, for our rights, for our dignity and respect to the very end," said Erica Kimball, Pritzker field organizer.

The workers said the tipping point that prompted them to come forward was how poorly a cultural sensitivity training session went on Sept. 12.