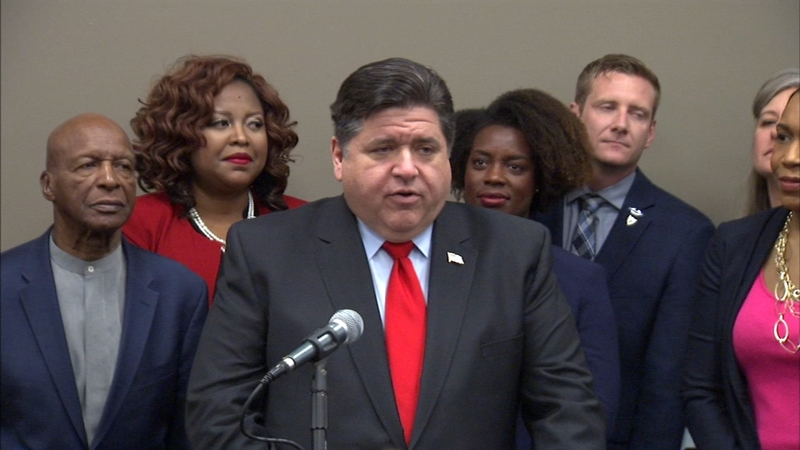 CHICAGO (WLS) -- Governor-Elect JB Pritzker is promising to make veterans a priority in his administration. He used Monday's Veterans Day holiday to announce his transition advisory committee on veterans' issues, but acknowledged funding could be a challenge.

This is the second committee Pritzker has announced; the first was the budget committee, which is getting priority due to the state's fiscal situation.

But on Veterans Day, Pritzker signaled that the men and women who have served our country deserve more.

Pritzker said one of the focuses of the Veterans Committee will be helping vets transition back home from active duty.

"I try to look at these challenges not as pinpointed issues, but rather in a holistic fashion, think about what a veteran goes through when they come out of service, from start to finish," he said.

"It's time to make sure our veterans can afford higher education when they return home, that they can build economic opportunity, have access to safe affordable and make sure they have access to healthcare," said Lt. Governor-Elect Juliana Stratton.

Pritzker said they will need to evaluate the condition of the shuttered Chicago veterans home that was never completed due to the state's budget crisis. He noted that federal dollars will pay for two-thirds of the work there, and in replacing the Legionnaires-plagued veterans home in Quincy. The governor-elect could not say where the state would find money for those buildings or other needed programs.

"We do have real fiscal challenges in the state, but that doesn't mean we can't set priorities and put the state on a path to delivering the services that we know that our veterans need. We need to look hard at all the services that are being offered today, making sure we're prioritizing the right ones," Pritzker said.

The committee includes several legislators with military experience, who stressed that their agenda is non-partisan.

"We're not a political football; we love our country, we've served our country and we want to move the ball forward for our fellow citizens," said State Rep. Linda Chapa LaVia (D-Aurora).

Pritzker said one of the things he is looking to do is to make it easier for veterans who gain skills in the military to get the corresponding civilian licenses or permits when they get out, to help them get jobs. He also wants to see more incentives for employers to hire vets.
Report a correction or typo
Related topics:
politicsillinoisjb pritzkerveterans dayveterans
Copyright © 2022 WLS-TV. All Rights Reserved.
TOP STORIES
Woman found screaming in abandoned Far South Side house, neighbor says
2nd man killed in Near North Side McDonald's mass shooting ID'd
Biden: Monkeypox threat doesn't rise to level of COVID-19
CPD looking for suspect in West Lawn church rectory robbery
28 shot, 1 fatally, in weekend violence, Chicago police say
Protest planned after nooses hung from trees near Evanston school
City holding Lolla free ticket sweepstakes for teens, young adults
Show More
Noah Thompson crowned as the next 'American Idol' in season finale
Metra MD-N service disrupted after truck hit in Hainesville
Residents mourn loss of resort as firefighters continue battling blaze
Something strange is happening with our universe: NASA
Beloved Old St. Pat's pastor, Fr. Hurley, returns to say farewell
More TOP STORIES News