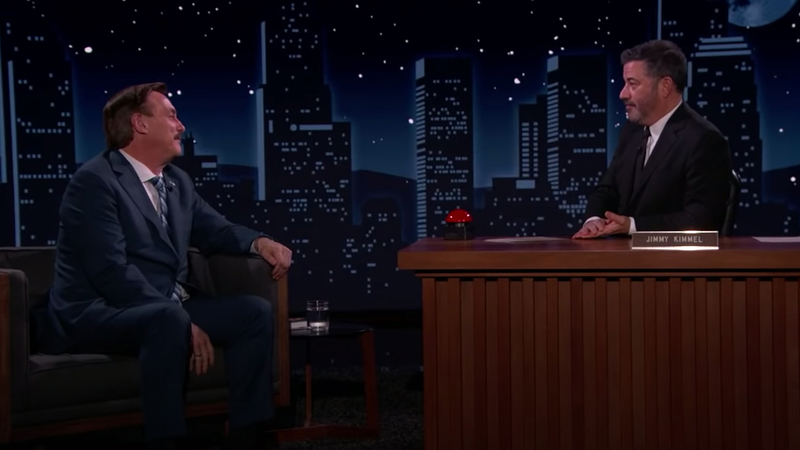 LOS ANGELES -- Jimmy Kimmel has interviewed many eccentric guests as the host of "Jimmy Kimmel Live!" over the years, but one of his most surreal interviews took place on Wednesday night.

The ABC late-night host sat down with MyPillow CEO Mike Lindell for an extensive talk.

Lindell is a prominent Trump supporter who has promoted debunked conspiracy theories about the 2020 election. In February, he was hit with a $1.3 billion lawsuit by Dominion Voting Systems, for spreading false claims about the company's voting machines.

Kimmel started the conversation with Lindell with a quick question regarding whether he had been vaccinated yet.

The two then got into a wide-ranging interview that went over Lindell's recovery from drug addiction, his unfounded conspiracy theories and the Dominion lawsuit.

"I worry about you. I feel like you are maybe self-destructive," Kimmel told Lindell. "I feel like you're going to be out dressed as Spider-Man on Hollywood Boulevard at the end of this whole thing."

Discussing Lindell's claims, Kimmel pulled out a buzzer "for the lawyers, in case there's anything that we have to challenge."

"A lot of people didn't want you to come on this show," Kimmel said. "But I think it's important that we talk to each other." Lindell agreed and cheered Kimmel's sentiments.

Kimmel then made it clear that he doesn't believe there's "any validity to any of this stuff that you're saying."

He also noted that he thinks that "you could potentially draw a line" from Lindell's claims "to the riot we had at the Capitol where people were killed."

Lindell pushed back, raising more unsubstantiated beliefs about the election being rigged, claiming he had evidence proving this. Lindell has not provided substantive evidence, and his views have been widely debunked. In its lawsuit, Dominion has vowed to prove there is no evidence.

Kimmel took a beat and plainly asked Lindell if he ever thinks it's weird, "that the only person in the country who has this evidence is a guy who sells pillows on cable."

The conversation then moved on to Lindell's relationship with former president Donald Trump, who Lindell said he spoke to a couple of weeks ago.

The interview came to an end with a Mike Lindell impersonator, played by James Adomian, crashed the interview.

Adomian came out holding a pillow and with a bloody bandage wrapped around his head.

"You got this guy out here. He's claiming to be me. That's an imposter," Adomian's Lindell said. "First they went for our phones and now they're sending in clones."

"I don't know which one is which, "Kimmel said, wrapping up the talk. "All I know is that MyPillows are no longer sold at any stores."